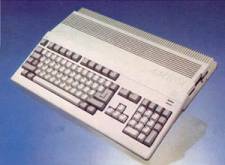 I first discovered 'Tracking' when I purchased a Commodore Amiga A500 (see right). I purchased the computer second hand and was given a collection of disks with it. On one of these disks contained a piece of software called, 'Pro-Tracker' and as far as I know, this was probably one of the first Tracking programs available.

The Commodre Amiga with its custom chip-set was ahead of its time. These were the days before SoundBlaster cards were available for the PC, in fact, all the PC could do was beep and make some very rudimental electronic sounds. The Amiga was new in that its sound chip (I think it was called Denise, don’t ask why?) had 4 voices with fully programmable wave forms, translated, means it had 4 channels, each capable of playing a sample (8 bit digitised sound).

Eventually the ‘Tracking’ scene emerged. With only 4 channels available and limited memory (my limit was 300k for samples and patterns), there was considerable skill in producing tracks that sounded good. Some common techniques evolved such as the use of pre-sampled chords (one for the major chords and one for the minors). This saved on the use of channels (i.e. 1 channel for a chord instead of 3) but at the expense of larger samples.

MUSIC ON THE PC

Over the years, PC technology caught and with increased processing power, falling prices and the digital sound card! It wasn't long before the PC overtook the Amiga. Trackers such as Scream Tracker, Impulse Tracker, ModTracker and many more emerged with the capability of playing 64+ channels, making the actual creation of tracks easier for the artist but perhaps and the expense of the ‘true’ skill involved in writing the music in the good old days!

Just to give you a taster, I’ve uploaded to this web-site some of my very first Tracks written on the Commodore Amiga A500 using Pro-Tracker 2. I’m sure you’ll notice a difference in the quality (remember it's 8 bit samples and very limited memory). Don't forget, after downloading the zip files you'll need a 'Player' to hear the music. Links to a select few can be found on the previous page.

To download the module, click the zip-icon or the filename. If you experience problems with this, right-click and select 'Save Target As'. The modern PC trackers and players can be used to play these modules once they're unzipped.

I would just like to thank an old friend Evan, as without him, these Amiga works would have been lost, unable to be transfered to the PC media. Thank you Evan!