Mr Simkin's finally convinced me to enter a Mountain Bike event, so over the Christmas break I signed up for the Shackleford Turkey Burner on the 6 Jan 2019. The event, organised by www.trailbreak.co.uk had 3 route options, Short, Medium and the Full Route with distances of 25km, 43km and 50km respectively. It cost a little more the further you cycle, but at £24 for the Full Route, it wasn't going to break the bank (but probably me), so I entered the Full Route.

In total, 5 of us decided to enter the Turkey Burner, myself, Daniel and his friend Martin from Horsham, travelled together in Daniel's car, and from a little further afield, Laurence from work and Pete, a friend of Laurence's. We arrived and parked up in the designated field reserved for parking and somehow managed to meet up quickly. The event was popular and I estimaed that there were several hundred riders present. 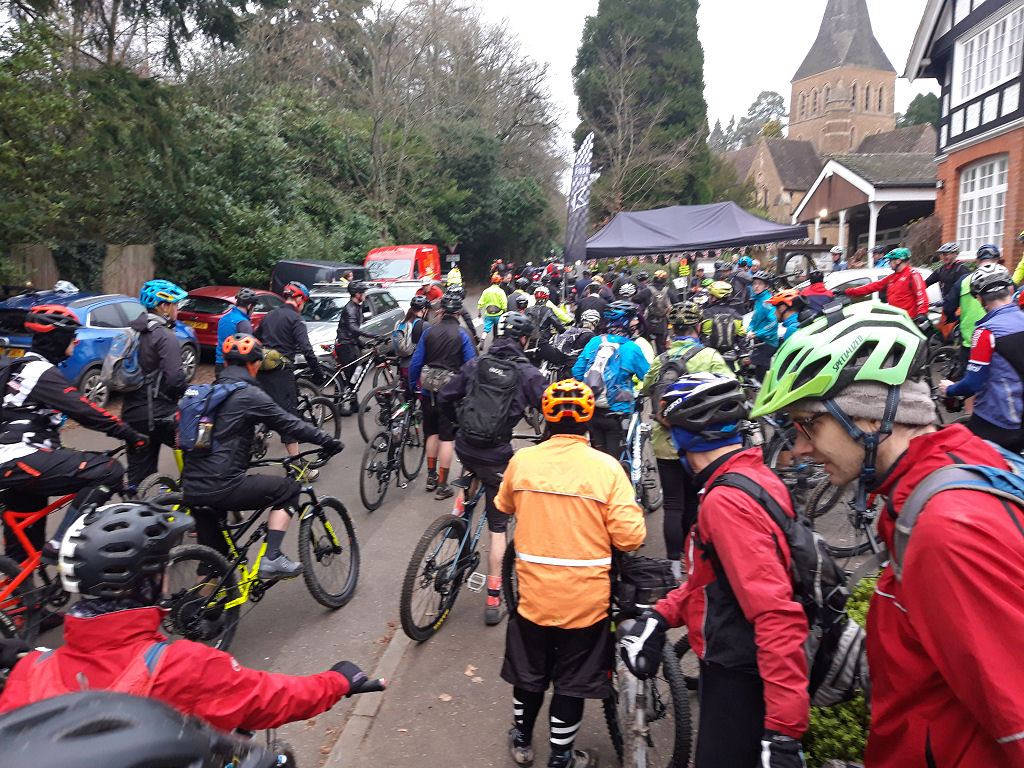 After we registeried at the village hall and had collected our 'timing chips', we congregated at the start gate. It wasn't an 'everyone go at once start', but a gradual release of batches of riders every five minutes or so. This was probably very sensible and ensured that the local narrow bridleways wouldn't become clogged with riders. From our little group, Martin and I were away first but as soon as we had passed the start and our race time started, the gate was closed leaving Daniel, Laurence and Pete behind. 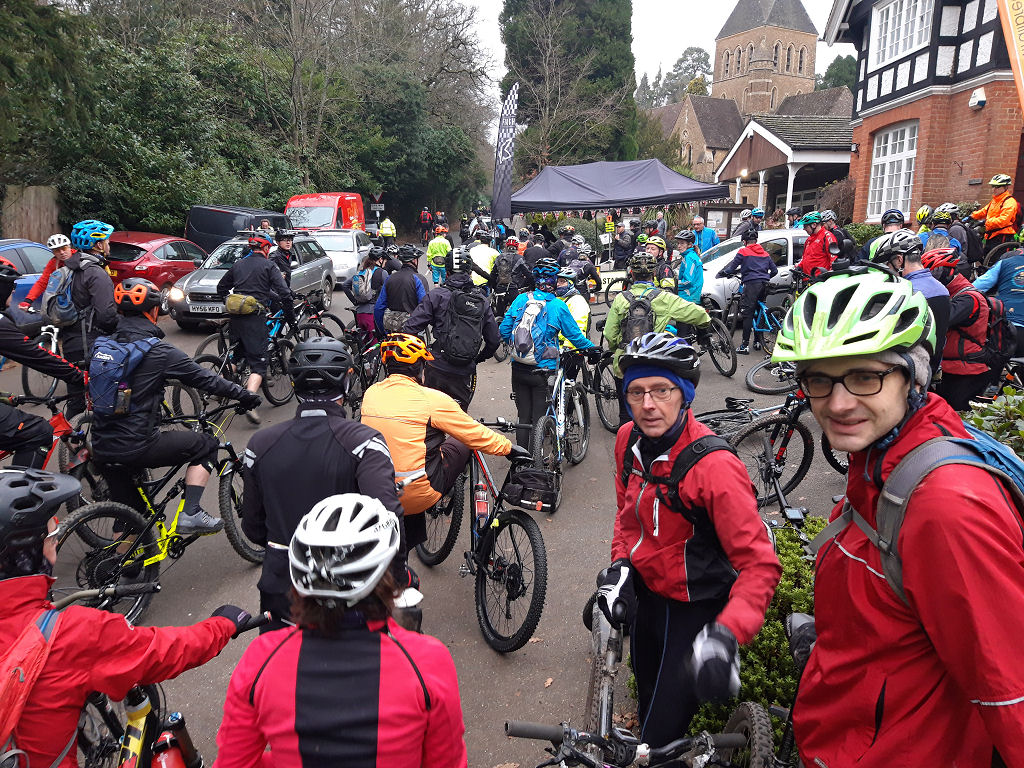 Martin and I cycled to the top of the street where we waited for the next batch of riders to be released and eventually, we were all reunited and on our way!

To say the conditions were perfect was an understatement. It wasn't too hot, cold or wet. The trails were dry with only the odd muddy puddle here and there. We decided to stay together as a group and enjoy the ride, but it was clear some riders were eager to race around the route. Considering the number of riders, everyone was very considerate to each other and to other users of the bridleways.

Some parts of the route I had ridden before when I had lived in Guildford, but for the most part, it was all unfamiliar territory. I was keen to see the Devil's Punch Bowl as the last time I had been there, the A3 carved around the edge of it. It made for some great views while sat in the traffic jams that were quite normal before the Hindhead Tunnel was completed in 2011, but now, all that remained was a grassy scar through the woodland where the road used to pass. 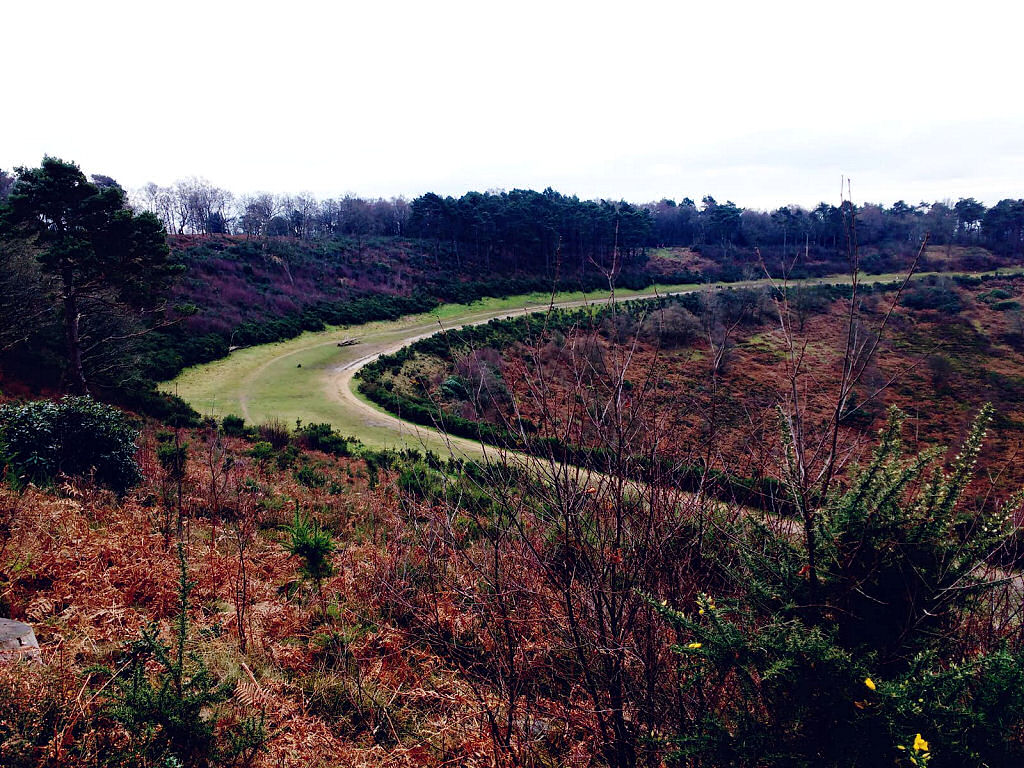 The further we progressed, the density of riders decreased. Quite a number appeared to be doing the Medium route, but our little group of 5, all still together continued our way around the Full Route which basically added a little bit extra before re-joining the Medium Route. I was certainly glad Daniel was navigating as it could have been very easy to inadvertently do another extra loop!

For the last 4-5km I was beginning to flag. Daniel, Laurence and Pete had now vanished into the distance and Martin and I continued, albeit at a much more relaxed pace. I began to lose Martin at a particularly nasty climb up and over the A3. The magnitude of this sharp little climb was only revealed when turning the corner at the base of it. I was half way up the climb, when Martin spotted it and announced his displeasure by various curses! It was at that point that I began to lose Martin.

Being so unfamiliar with the route and not monitoring the miles I had already clocked up, it was difficult to pace myself. I didn't know if 1 or 5 miles remained. It was only when I crossed a couple of fields and popped out on a lane that I realised the finish was merely around the corner. From there I gently rolled down the hill and crossed the finish, confirmed by a little beep as the timing chip registered my completion of the Full Route - promptly followed by a little man desperate to recover my timing chip! 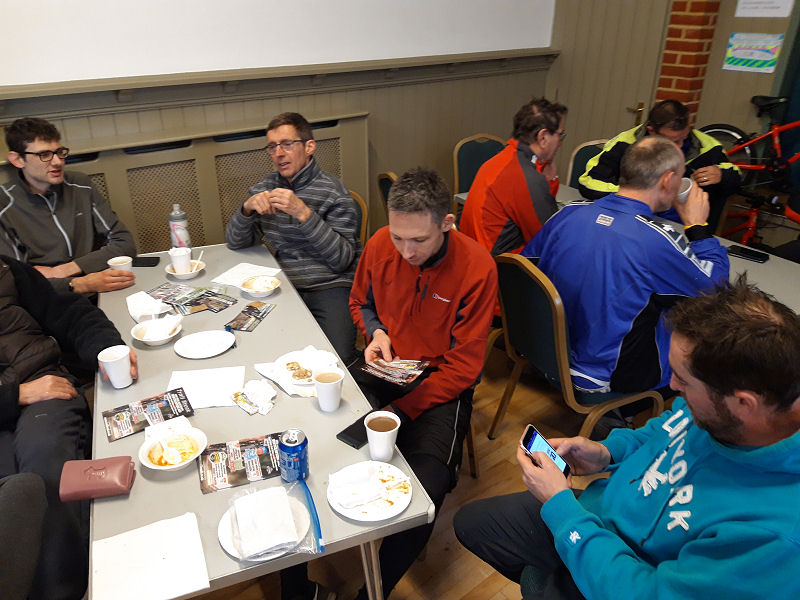 Martin wasn't far behind and it wasn't long before all 5 of us were reunited. After we checked our finish times, we grabbed a bite to eat in the village hall before we made our way back to the car-park where we packed up and set off on our homeward journeys.

A great day out on a fantastic route shared with great company!

It was just for fun, but here's our offical ride times and time band classifications:

Something appears wrong with the official times as Pete started with Daniel and Laurence, and finished shortly after them!