The night before Steve had analysed all the available forecasts and had noticed a little kink in the isobars that hinted of a reduction in wind strength and a possible window to fly Famara. It required an early launch and for us to be back on the ground no later than 11am as weather was inbound. We'd only truly know if the wind had dropped enough when we arrived at launch and with the forecast for the rest of the week still looking strong, everyone was motivated for the early start.

Steve and I were first to arrive at the first of the launch sites while the sun was still emerging from the horizon. As we looked southward towards the adjacent launch site, we could see other pilots had also arrived early and had rigged their gliders there. We decided to join them as this launch was better orientated for the north-westerly breeze. My glider, still on the roof of another vehicle, had not yet arrived, so I assisted Steve.

By the time the rest of the group had arrived, the wind had already started to increase. The pilots we discovered earlier had launched and Steve was ready with his hired U2 160. John B. assisted Steve to launch while the rest of us prepared ourselves and our gliders.

I initially began to rig my glider on the A-frame, well back from launch, but when it started to get blown across the stony ground, I flipped it around and continued to flat rig it. By the time I was ready, Steve and Mike had already set-off and were somewhere in the skies above, Ben was still rigging and John assisted us on the ground. 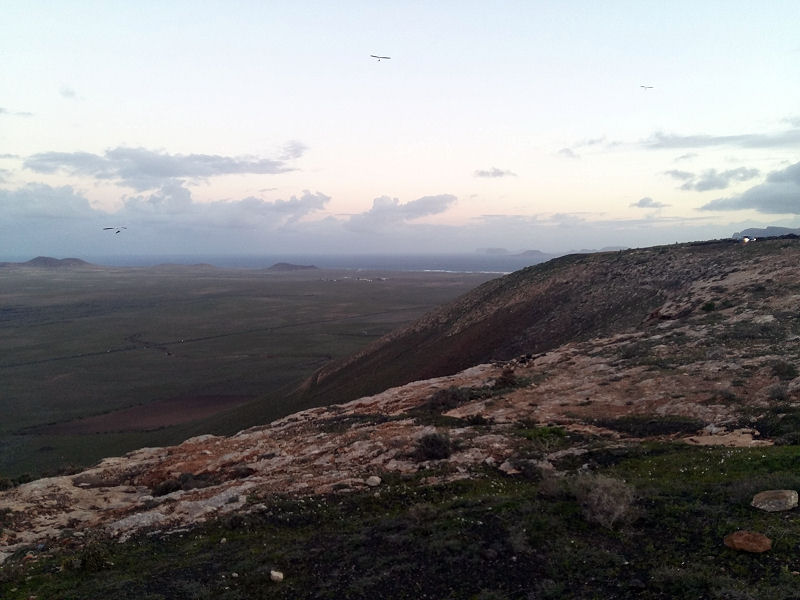 Sunrise at Famara
Just after sunrise and the first gliders take to the air at Famara before the strong winds and rain return.
7 Feb 2018

To say I was anxious was an understatement, with the wind increasing, not feeling particularly current, not in great health and with inbound weather to watch out for, there was much on my mind. Clipped in, I made my way around Ben then across to John, who patiently waited on launch. After my hang check was completed, John gave me one final brief then I instructed release. John skipped off to the right and when he was clear I launched, not the best as I rushed into my harness far too early, but the wings remained level and the glider began to climb. Mike was established some 200 feet above and I was focussed on getting to the Famara cliffs. My vario emitted happy beeps so I continued to speed along the ridge in a northward direction where I slowly climbed and left Mike behind. Eventually I climbed above the Famara upper launch, crossed the first little crack in the hill before I reached the first obstacle, the aptly named, "Valley of Doom!". This is a valley that must be crossed to reach the Famara cliffs, you need to be high enough to make the up-wind glide without disappearing in the lee of the spine at the end of the Famara cliffs. I decided to climb a few more hundred feet before attempting the crossing, and this was easily achieved with a single 180 back along the ridge.

With my VG pulled fully on, my toes pointed and the bar pulled in for additional wind penetrating speed, I commenced my crossing of the Valley of Doom! I constantly used the top of the spine in front of me and the ground beyond it as a reference to judge my progress. With increasing amounts of ground being revealed beyond the spine, I was confident and I was soon on the start of the Famara cliffs. My vario confirmed this when it began to chirp happy beeps and I started to climb in this very smooth sea breeze. 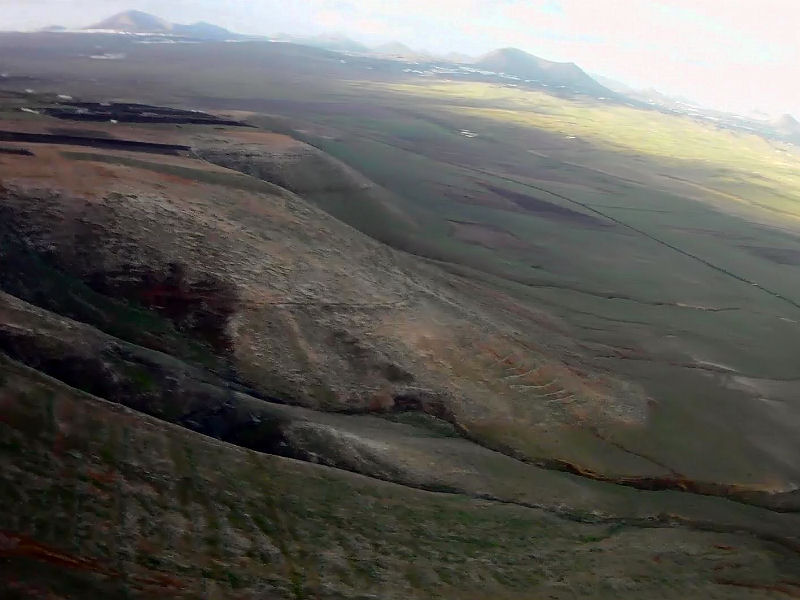 When I learned I was headed to Lanzarote, there was only one thing I really wanted to do, to fly the Famara cliffs. The moment I had crossed the Valley of Doom and my glider began to climb, I had met my objective and I buzzed with childlike excitement! Even if the weather for the rest of the week did not play ball, I was more than content flying Famara! 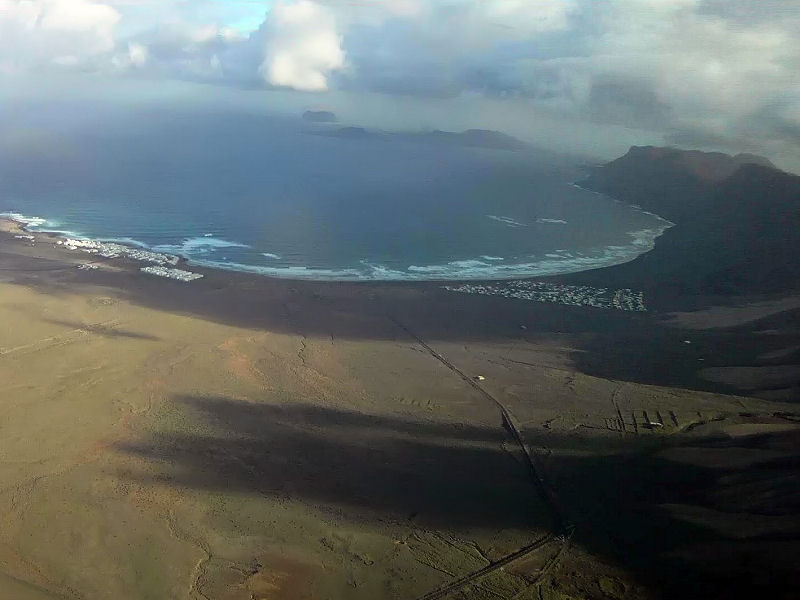 I continued northward along the steepening rugged slopes beneath me all the while I looked ahead. I couldn't see any other gliders around, not a surprise considering the clouds had begun to lower and orographic clouds were forming just above the cliffs. I pushed on as far as I dared but with thickening clouds, clouds forming directly beneath me and light rain ahead, I decided to turn back. I was a little disappointed in myself for not pushing on to the end, but considered the conditions and that it was the very first time I had flown anything like this, it was the sensible choice. I did whoop with excitement when I flew around the edge of the orographic clouds, taking me several hundred metres out to sea before it was time to head back. 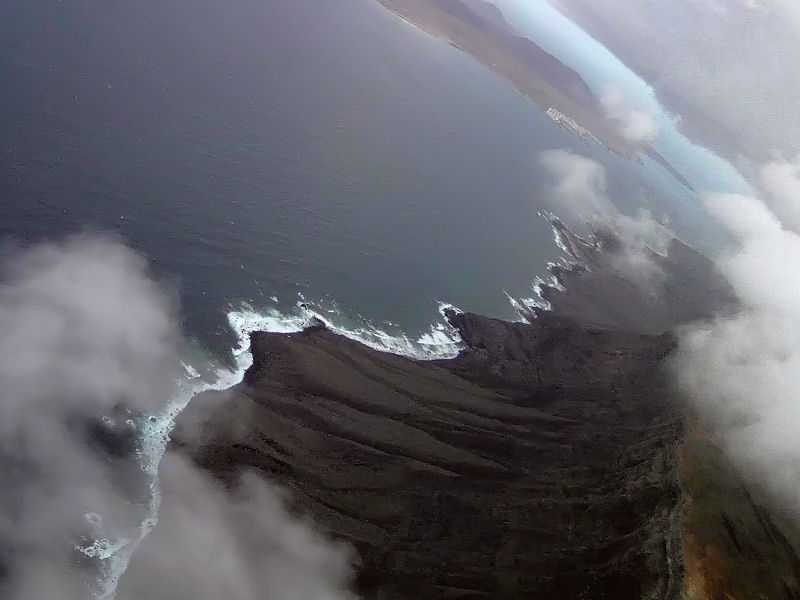 Flying Famara
Flying high above the Famara cliffs with orographic clouds forming around me.
7 Feb 2018

When I was back towards launch I noticed a rain front coming in from the west (with some lovely rainbows) and another from the north. It was coming up to 9:30am so I decided to land. Unfortunately, this was the point when things started to go wrong. The wind had increased quite dramatically and I was barely penetrating forwards and all the while, slowly descending. I pulled the VG fully on and began to slowly penetrate forwards and eventually arrived on the edge of the landing field, albeit it 400 feet or so above it. I began a turn to the left to line up for landing then turned back to the right after crossing the road. I then rushed on to the uprights and briefly popped the nose of the glider. I quickly recovered but it had already set the glider off on a turn to the left with the right wing raising and left lowering! Despite my best attempts to correct it, I was now just a passenger; I hadn't noticed it at the time, but still had the VG fully on which only exacerbated the situation! As the glider was now headed crosswind and still rotating I had no choice so planted it on the ground. The left wheel touched first and with a significant sideways velocity, I felt the left upright gently give as my hand pushed through it, followed by the nose of the glider hitting the ground. I had landed almost 180 degrees to the wind and with the wind trying to ground loop the glider, I was able to quickly run the glider around the nose to secure it and inspect the damage. The left upright was indeed folded and the right upright had sustained a small kink and slight bend, both needed replacement. Later inspections revealed that this was the extent of the damage!

I was unfortunately not the only one having difficulty landing here, another pilot had an almost similar landing, landing in almost the same place I did with the glider veering off to the left, although in my case, I'm confident it was my own poor piloting that induced this turn and the fact that the VG was on made it almost impossible to recover!

In terms of the weather, by 11am the top of the Farama cliffs were buried in thick grey cloud and I was soaked in a particularly heavy downpour when I walked along Famara beach with Rod. We all ultimately ended up in one of the local cafes where we enjoyed coffee and sheltered from the rain. I was more than happy, I had flown the Famara cliffs! 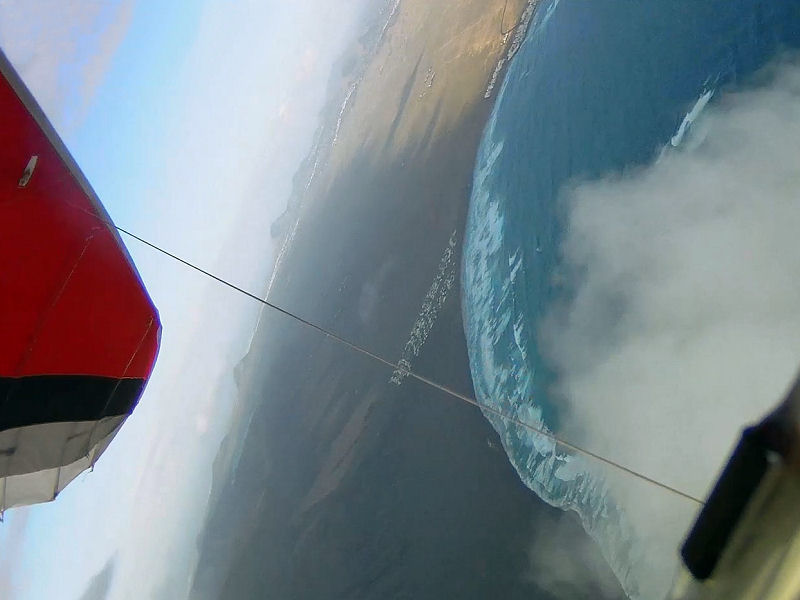 Flying Above the Famara Cliffs
Turning back towards take-off as orographic cloud starts forming below and around me.
7 Feb 2018

Famara
Video highlights of my flight from Famara and the famous Famara Cliffs. Unfortunately the battery on the camera did not last for the entire flight and missed my awful landing which resulted in two damaged uprights but it was worth it, this was a flight like no other that I have had to date! 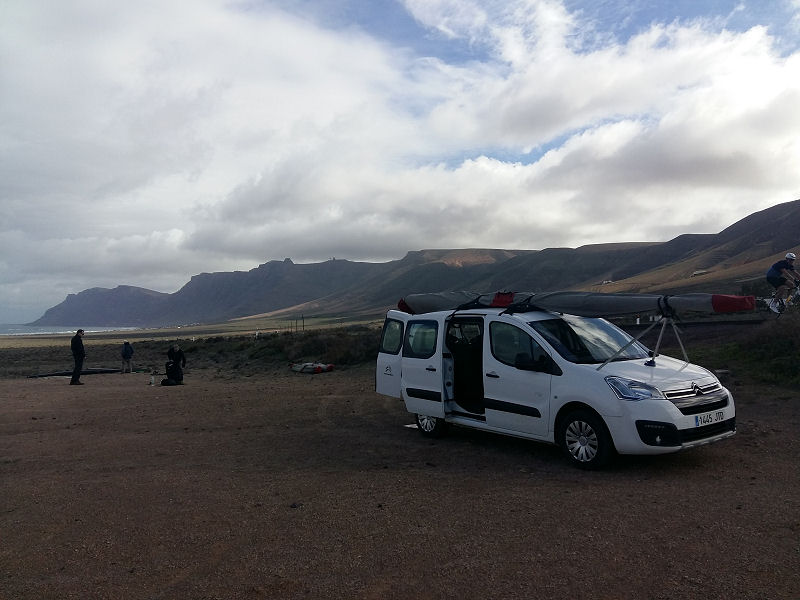 Famara Bottom Landing
After my flight and not so great landing, John comes down to recover us.
7 Feb 2018 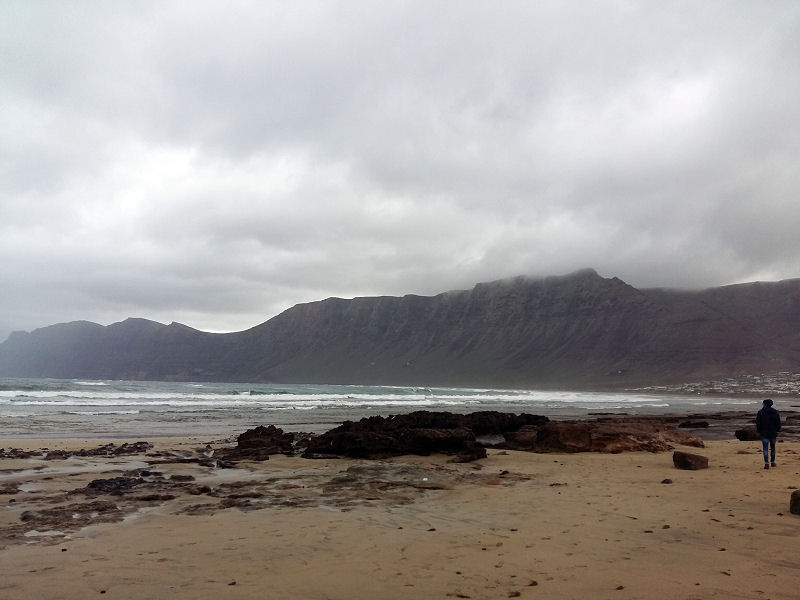 Famara Beach
After a quick coffee and an hour after I landed, the heavens open as Rod and I walk along Famara beach to find Mike's glider. The tops of the Famara cliffs are starting to be engulfed by cloud.
7 Feb 2018