Flight 1: U2 160; Mendlesham; 0h 01m; 60ft; A cross wind take-off and I pop the nose; the left wing stalls and a lock-out starts. I almost recover but run out of air and crash into the ground.

It was 4 years since I had last winched so I was eager to return to Mendlesham to rediscover this launch technique. Since my last winch I had changed glider and harness but considered myself to be reasonably current with fairly recent hill and aerotow launches; but perhaps not as much as I'd liked!

I had travelled up to Suffolk the night before and slept in my van on the runway. After a reasonable night and one of my worst breakfasts at the local Little Chef, I was ready for the day. As pilots began to arrive it was great to get reacquainted with some old faces and to meet some new ones. After some discussions about wind direction and the most appropriate launch / winch orientation, the Mendlesham main runway was selected. The wind was forecast to be north westerly veering to a South Easterly during the day, certainly not optimal for Mendlesham's west launch! 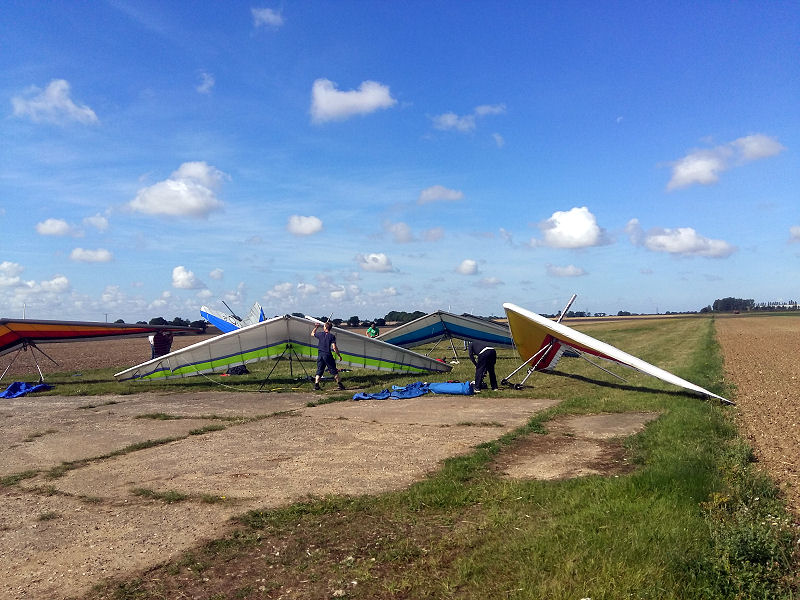 Mendlesham
The start to what should have been a beautiful day!
13 Aug 2017

After the initial tows were completed, all with some significant crosswind component, my turn finally arrived. I felt confident but a little concerned with the amount of crosswind. Several times my launch had to be aborted as the wind moved to 90 degrees cross and occasionally a mild swing around to a tailwind! In hindsight I should have stopped there and then, but after a 130 mile drive to Mendlesham, I had put myself under pressure to launch. I had become fixated on the windsock over to my right when I should have been focussed on my glider and the winch some 600 feet in front of me. I was in total belief that I could pull it off, and when the windsock backed around to a north westerly, a 45 degree crosswind, I started the tow by calling "All Out".

That was the point of no return; despite plenty of opportunity to prevent it, I had now set in motion a sequence of events that I would later come to regret. It's amazing how in four years I had forgotten the force with which the winch can pull with. I had already unwittingly let the nose of the glider drift upwards due to my distraction with the windsock and when I was suddenly hauled forwards, the pitch of the glider further increased to a dangerous angle. I felt like I was ripped from the ground and catapulted skyward. How the weak link didn't fail I've no idea, but with the glider heavily pitched upwards, the left wing protested and began to stall which instigated a diving turn to the left. I believe this was the point when the winch operator wisely and correctly guillotined the cable. At the same time I was frantically trying to hit the release fearing a full lockout was underway!

In my desperate attempt to recover, I pulled the bar in and the stalled wing began to fly and the glider began to level out. That was the moment when I ran out of altitude and the left side of the control frame impacted and dug into the loose soil from the recently ploughed field. The left upright yielded and folded and the glider, with myself attached to it, abruptly stopped in a cloud of dust and I was slammed into the ground chest first. The rush of the air fell silent and I laid motionless under my glider. 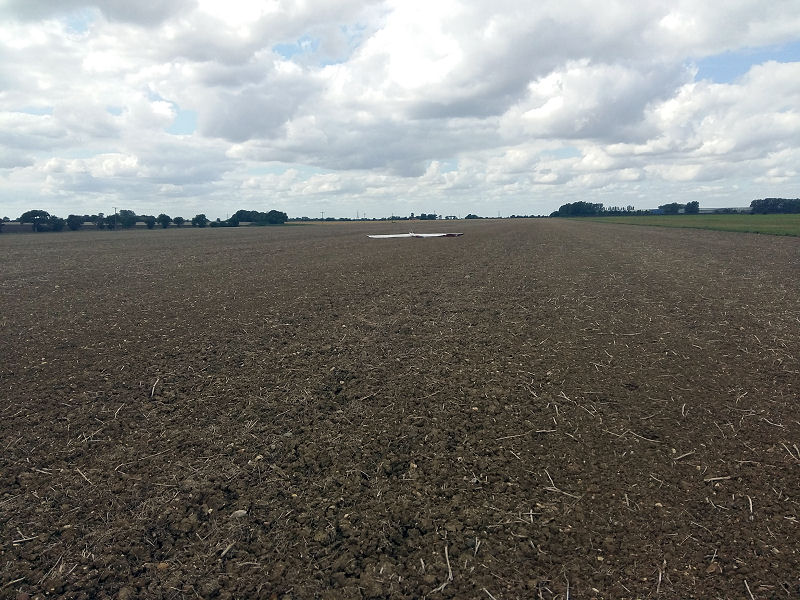 Crash Location
After a terrible launch and a close encounter with a lock out ; this is the resting location of the glider after ground impact!
13 Aug 2017

The moments that followed I began a series of self-diagnostics; I felt no notable pain at first and saw some broken bits of metal around me; b****cks that's the glider! My hands worked and my arms appeared ok. I was able to push myself up to a seated position and started to feel some pain from my left ankle - that's weird I thought! I was aware of pain that had developed in my right hand but I was able to make a thumbs-up to signal I'm ok to those that had run over to check I was ok. When Paul and others arrived I am released from my mangled glider. After I'm helped to my feet I started to feel a burning pain in the right side of my chest. By some miracle, I seemed relatively ok and the glider didn't look too bad either. The left upright had completed folded and the right upright had a series of interesting buckles and dents along its length. From initial inspections, that appeared to be the extent of the damage; although it will be subjected to a total and thorough inspection with South Downs Hang Gliding in the not too distant future! 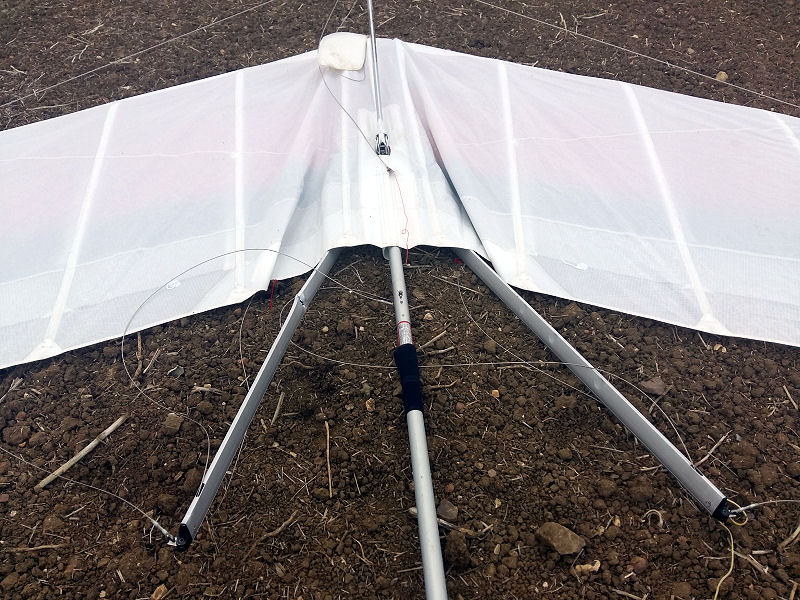 A Broken Glider
Initial inspection reveals the left upright has folded and the right has an interesting series of dents along its length; both will need replacement!
13 Aug 2017

As for myself, the rear wires of the glider had probably ripped across the back of my left ankle giving me a very interesting wire burn, my right hand was bruised and I had various cuts and bruises. As I began to pack my glider away I had become aware that my ribs down my right side were throbbing (later to be confirmed as suspected fractures following a trip to hospital later that day). In all honesty, the biggest damage was to my pride but hopefully, with two to three weeks rest and two new uprights for the U2 (of which I had spare), I will be back to try again!