A Short Trip Over the Back

The forecast had suggested a north westerly wind which would ease throughout the day. I arrived at the Devil's Dyke at 9am which ensured a window for flying my hang glider without hordes of paragliders to contend with. When I arrived the wind was west of northwest and sometimes westerly and meant the Truleigh ridge wouldn't be on and that traffic had to focus on the main pub hill. 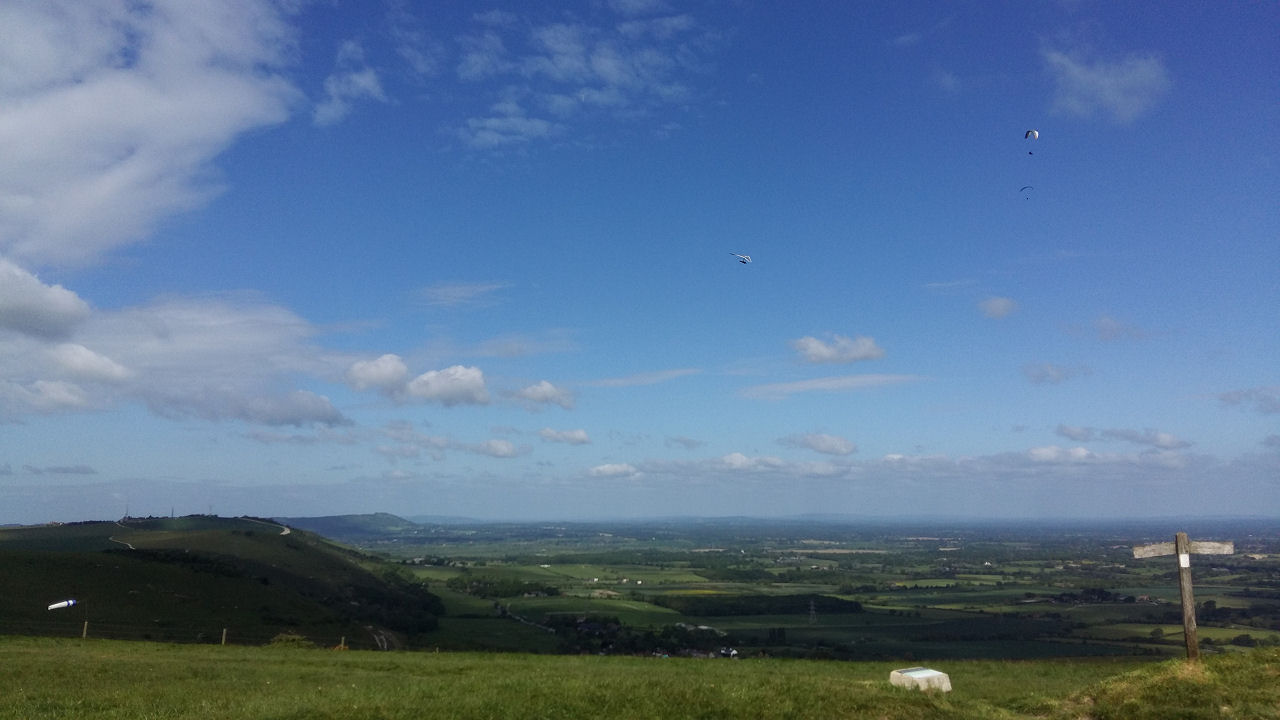 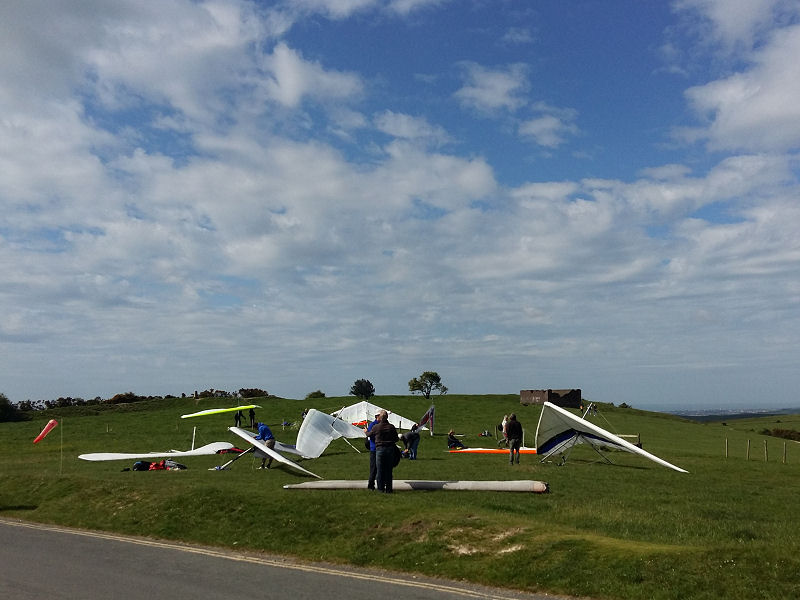 Rigging Gliders
It's the start of the day and everyone is slowly rigging their gliders full with high hopes for the day.
25 May 2015

With the knowledge that the wind would drop, I rigged my glider eager to get into the air. Above, gliders had already taken to the air and appeared to struggle for any good lift. When I was ready, I moved to the front of the hill and joined a small launch queue behind John. Ron had already launched and maintained ridge height on his Sting 3. John launched and another from the paddock as the wind seemed to decrease in strength. Some paragliders to the right of me ruffled as their pilots floated up their canopies with launch intent. I had decided it was probably now or never, so launched into the weak but maintainable conditions and joined those already established in the soaring pattern above the hill.

By the time I had completed my first 180 I had already descended below ridge height. I knew I had to work hard to stay up and with others in the same predicament; the available airspace to achieve this was limited. Furthermore, a couple of paragliders had launched. I had decided to try my luck and see what lift I could find out front. It was a risky strategy but ensured I was free from traffic and I had limited success and was able to maintain a similar height to those flying the ridge.

It wasn't until I flew deep into the bowl that I connected with something and was able to climb above the ridge; not high, but enough to make me feel a little more confident that I wouldn't be headed for the bottom landing field. Unfortunately, Ron on his Sting had conceded and had safely landed at the bottom. 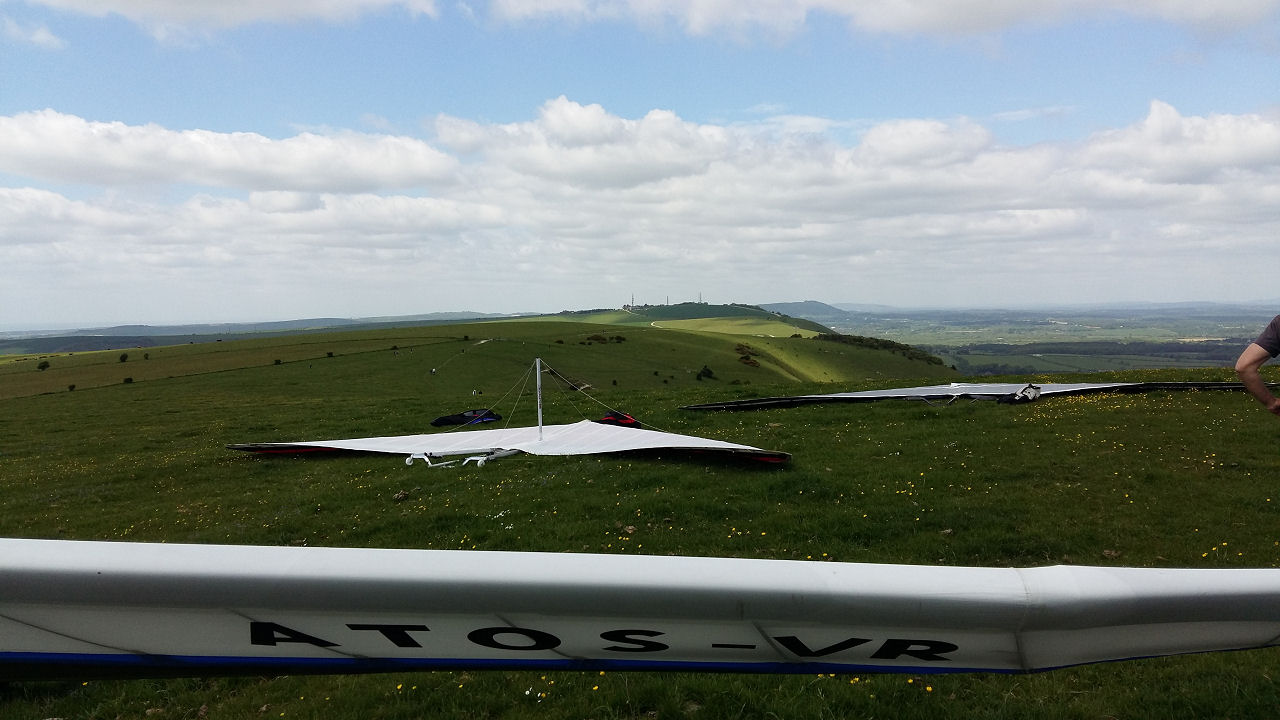 Top Landed
With the wind slowly dropping and ever more paragliders taking to the sky, most of the hangies top land in the large field at the back.
25 May 2015

To spice things up more, those remaining hang glider pilots had also started to launch - I suspect they shared the same thought as me and wanted to get a flight in before the wind decreased and the Dyke was full of paragliders!

I started having better luck with the lift and for a period of time managed to stay above most of those flying. I contribute this to the Wills Wing U2 and not my own skills. A couple of times, as I descended and those below climbed, I had to take avoidance moves to avoid conflicts, the most notable happened while thermalling as I had to exit early when another glider headed directly towards me!

Paraglider Time!
With the wind dropping off the paraglider pilots that had been patiently waiting take to the skies. Flying in this compact wall of traffic wasn't for me!
25 May 2015

Eventually, I lucked out and found a very lumpy but consistent thermal that I shared with a paraglider. The wind drift over the back was pretty pronounced and as I climbed the Dyke moved further and further away. At just over 1,100 feet above take-off I lost the thermal. I considered to find it again but settled on a long glide back to the Dyke for an easy top landing in the large field at the back. I had to execute a few S-turns and a 360 to bleed off remaining height before I gently touched down.

After a laborious carry of the glider towards the fort, I collapsed my glider and watched as one by one, other hang gliders joined me. The wind had now decreased and as expected, the sky became full of paragliders. That was me done for the day - not bad for an early morning at the Dyke! 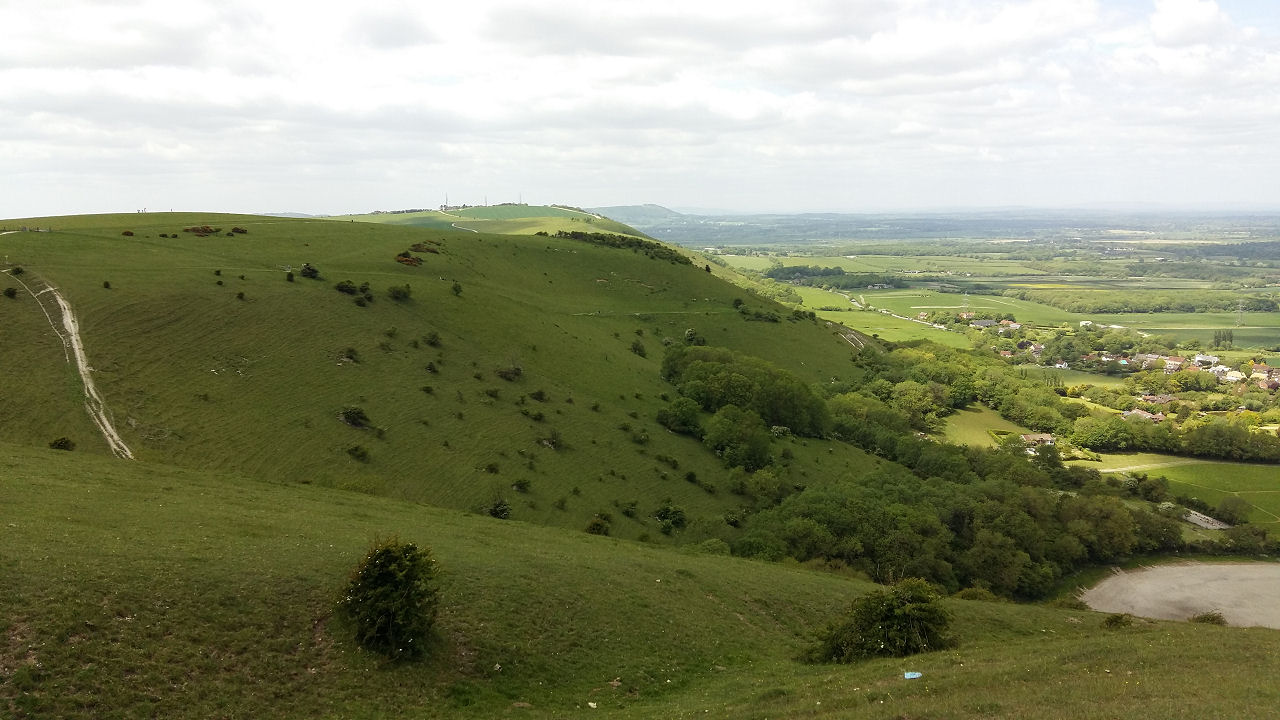 The Main Bowl
A view of the main bowl at the Devil's dyke with the lush green grass indicating that summer is just around the corner!
25 May 2015 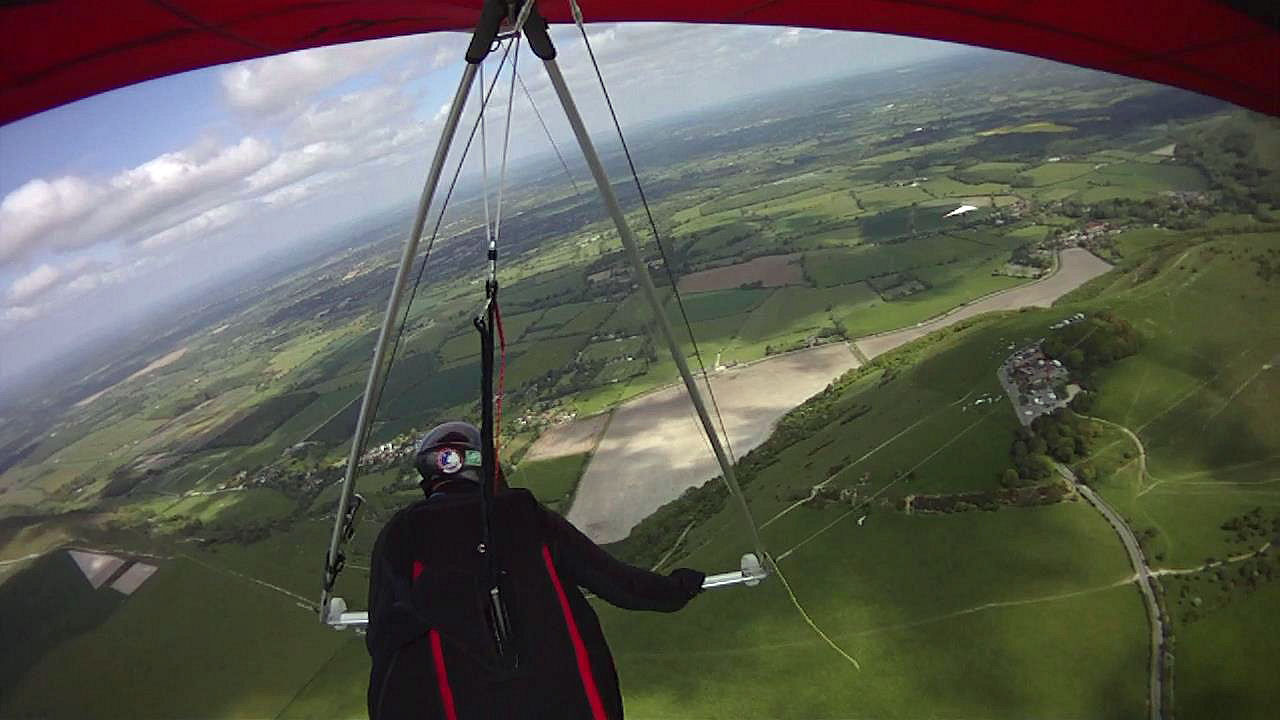 Looking Down at the Dyke
I managed to find a thermal and slowly climb high over the Devil's dyke and slowly drift over the back.
25 May 2015 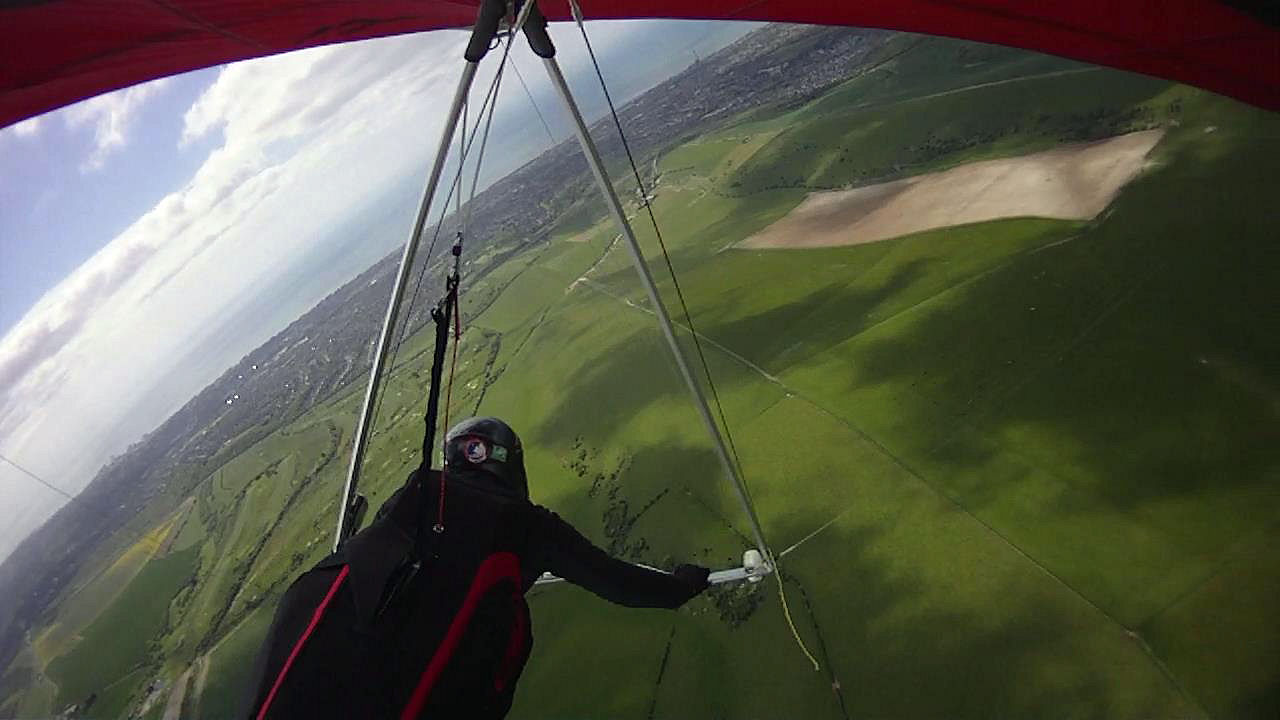 Thermalling Over the Dyke
Over 1000ft above take-off and drifting over the back of the Devil's Dyke. Looking towards the coast the centre of Brighton can be viewed to the left of the photograph and Shoreham power station in the middle right of the photograph.
25 May 2015

A Short Trip Over the Back
Highlights of my 33 minute flight at the Devil's Dyke on my new U2 160. I eventually hook into a thermal and climb to 1100ft above take-off.