Despite several failed attempts to fly over the last few weekends, all in vain due to the recent high winds, Sunday 19 Apr 2015 looked to be the day when I would have success! I had recently re-joined the Suffolk Coastal Floaters Hang Gliding Club with a view of re-commencing winching with them. Their spring competition was to be held this weekend, but was cancelled on the Friday evening; again due to the high winds being forecast, so Bo Peep for Sunday was the most viable option.

Sunday came and I arrived at Bo Peep mid-morning and was very pleased to see the hang gliding car park full of cars and people beginning to rig their gliders. The wind was bang on the hill, but top end plus a bit more and gusty. Most of the pilots were contempt to just rigging their gliders and waiting to see who'd be first off, but a few notable pilots were already airborne. The forecast was predicting a decrease in wind strength during the day, so I decided the waiting game was the best option for me, especially when considering that I was a little rusty and still getting used to the U2. 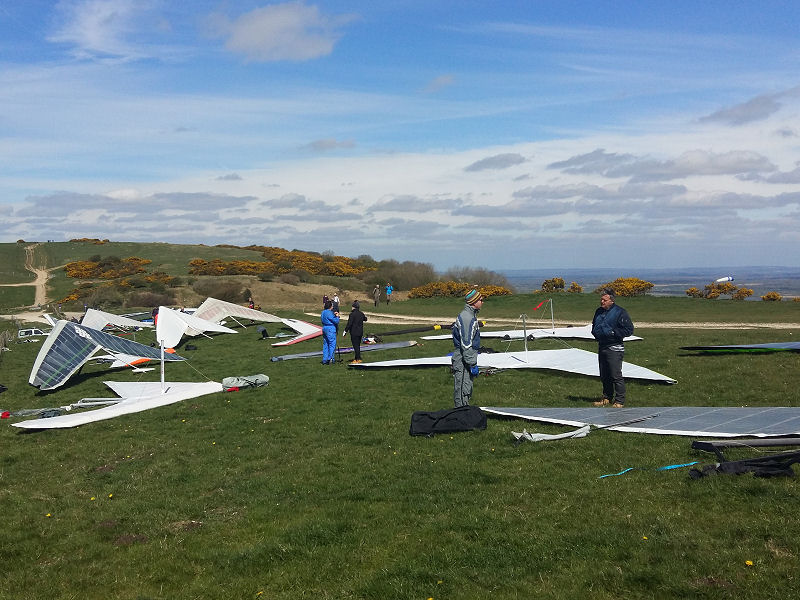 By noon the wind was still strong but feeling much more appealing. The level of gusts had also reduced and a launch window had opened. Pilots were beginning to take to the skies and it wasn't long before I was ready and positioned at the front of the hill. A launch queue had formed. Scott was in front of me, so I waited for him to launch and once he was away and established, I too launched.

Launch was smooth and un-eventful (just the way I like them) and I turned right and headed towards the paragliders bowl (I don't know why people call it that, but it's the name the stuck on the day). Considering the wind strength it was hard to gain any significant height in the ridge lift. Fortunately there was evidence of thermals and I was able to bumble about in them reaching 600 feet above take off. More and more hang gliders began launching and it wasn't long before I found a reliable thermal. I worked this to an altitude of 2260 feet above take-off, sharing it with a paraglider was we climbed together. I hadn't drifted very far over the back and looking below I could see others climbing in what I assumed was a multi-cored thermal. Not being able to recognise any specific pattern in their orbits of thermals, I decided to push up wind to see what else I could connect with.

I pushed almost as far as the A27 and after hitting 1200 feet above take-off and not connecting with anything I turned tail and returned to the ridge, arriving with 400 feet to play with. Scanning the ridge below, it was evident that the lift had simply dropped off and everyone was fighting for what available lift remained, myself included! I decided that this would be a true test to see how the U2 performed against the Sting 3.

I was certainly feeling confident on the U2 and darted around the paragliders that had now launched as I scratched back and forth in the paragliding bowl trying to maintain. Most of the flex wings had now conceded and were congregating in the bottom landing field. A couple of times I was at ridge height or just below and considered it likely I was going to join them.

Eventually my perseverance paid off and a new lift cycle began. Glancing at my watch I noted that I was coming up for an hour aloft so decided that as soon as I was high enough I'd top land. I was still nervous about top landings since my crash, so opted to land at the top behind the paragliding bowl, away from the busy hang glider rigging area.

My set-up was ok, not great, and I was able to easily climb up the up-rights on the U2. What followed came as a little surprise as I wasn't expecting the extreme wind gradient that I experienced in the last 4 feet of my flight. My glider also tracked sideways across the ground as I descended. As I was dumped the last 4 feet, I was able to flair the glider but not get my feel under me properly. The glider then gently touched down on the wheels, rolled forward and came to rest. I was quickly upright and back in control, but alas, the paragliders that were waiting to launch all saw my graceful belly flop from the skies!