There was quite a bit of interest expressed in flying the weekend with the wind forecast to be north-westerly, slowly veering to a north of north east by the end of the day. The Devil's Dyke was the favoured destination for most pilots. I on the other hand prefer to be different and with an expected late morning arrival with the wind forecast to be just west of north at Firle, that was my elected destination. I had also had a significant break from flying so was keen to avoid a crowded site. While I expected some paragliding activity due to the forecast wind strength, I considered that Firle would again be the best option.

En-route to Firle I passed the Devil's Dyke and spotted paragliders flying, so I knew it was on! When I arrived at Firle I was surprised there were no hang gliders present, a handful of paragliders being laid out and one doing a very slow sled ride to the bottom. After I had parked, I walked to the front of the hill to get a feel for the wind. The wind strength was good, but it was well off to the west. With that knowledge and no urgency, I retreated to my van to drink coffee and update everyone on the conditions via Telegram. 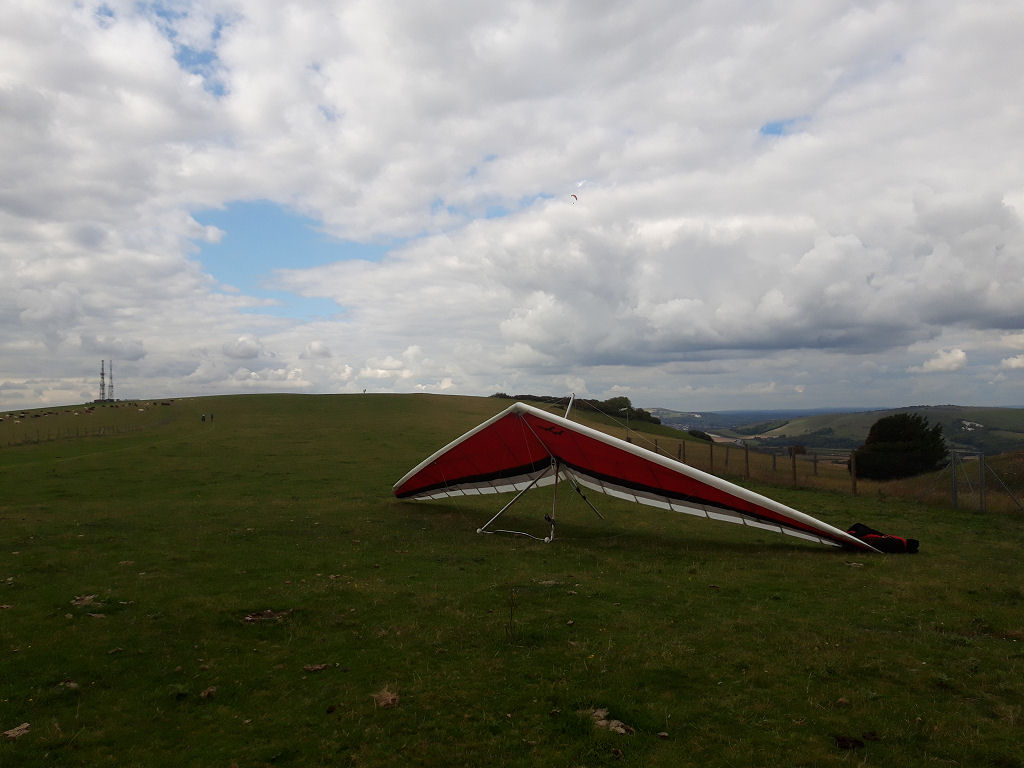 Rigged and Ready
Dan's U2 Hang Glider, rigged and ready for flight!

Over the next 45 minutes I watched the paragliders launch, scratch around at ridge height then land. I wasn't inspired to remove my glider from the roof of the van, so continued to chillax and enjoyed the scenery. It wasn't until Maceij posted on Telegram to inform me everyone was at the Dyke before I reluctantly considered I had made a mistake by coming to Firle. With that knowledge, I set off to the Dyke.

When I arrived at the Dyke I was confronted by complete chaos. There were cars everywhere, nowhere to park, and a running event in progress. After I bumbled around the car park trying to find a space, I eventually conceded and set off to the Dyke bottom landing field to see if anyone was down there. I found Matt from Airsports Sussex teaching and took a call from Steve Purdie encouraging me to come along to Ditchling. While I was tempted, I wasn't keen to try a new site being so un-current and was unsure of the bottom landing possibilities at Ditchling.

Defeated but not beaten, I returned to Firle and things looked much, much better. Two paragliders were up and beat back and forth at around 100ft above take-off. Modellers were also present and the wind was now only slightly off to the west. I quickly rigged and began to faff with some new cameras and mounts. The lift was cyclic and the paragliders landed when it became too blowy and returned to the air when not. After a brief light shower, I launched while the paragliders were grounded. For a while I enjoyed the entire site to myself before the paragliders began to launch. This was perfect for blowing off my aviation cobwebs and although it was not anything epic, it was a great way to get back into the air. It also gave me an opportunity to practice climbing onto the uprights, something that I do from time to time to avoid the development of bad habits like, popping the nose! 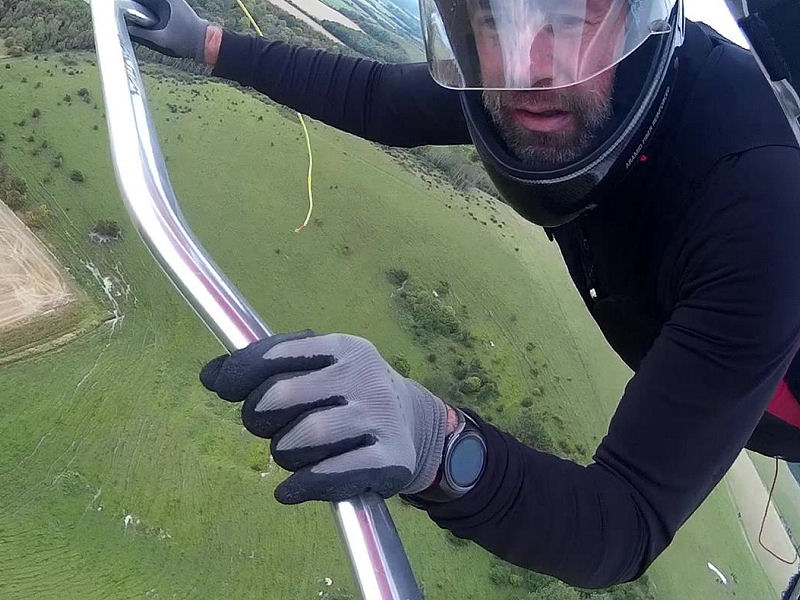 Dan
A photograph of Dan flying and trying out a new camera mount and position.

After I was joined by 3 paragliders and being a good 100ft above them, I decided this would be a good time to top land. As I had practiced, I climbed on to the uprights early, zipped over the reservoir and headed for the top landing. With the top landing now dissected by a fence, I focussed on staying up-wind of it and slowly crabbed my way along and slowly descended. There was quite a notable wind gradient in the last 10 feet and my ground speed increased quickly which required a little run before the glider came to rest. 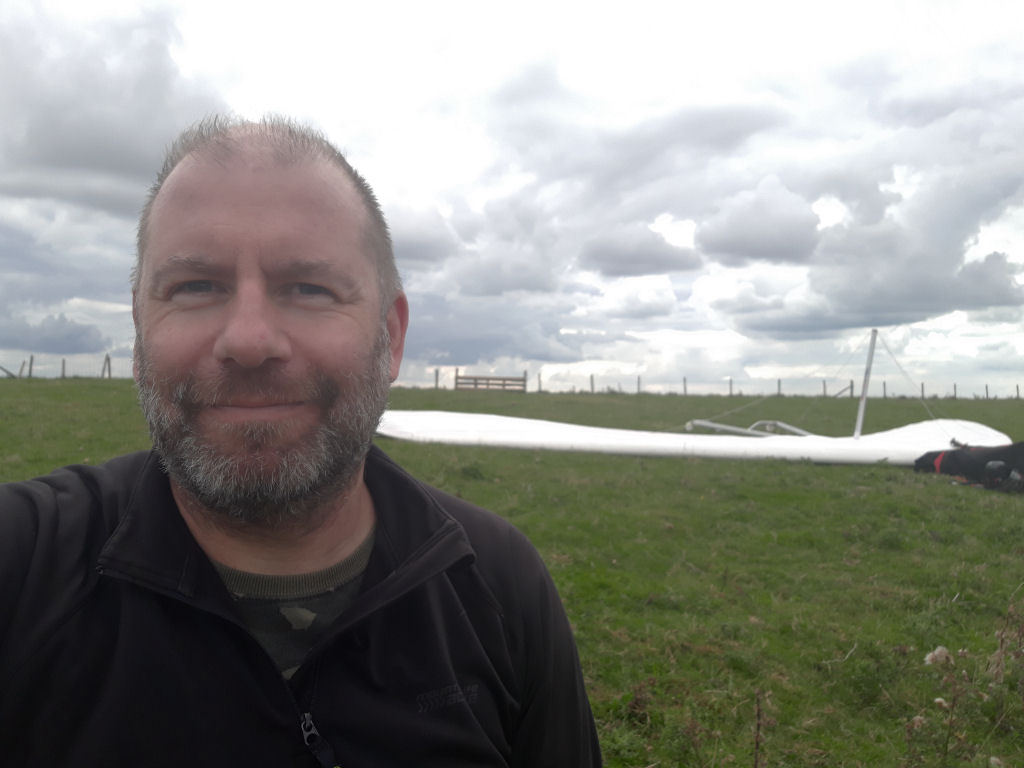 Dan
Dan after his first flight.

With a successful non eventful flight I felt my flying confidence had returned. I was still alone at Firle, so returned to my van for more coffee and a spot of lunch. A short while later, the first and only hang glider pilot turned up (Maceij). He had given up with the Dyke after he had bottom landed and the wind had veered east of north, so decided to follow the wind and join me at Firle. Firle now looked even better as the overcast sky had given way to blue skies and white fluffy clouds. As Maceij rigged his glider I returned to launch for a second flight.

Firle Flight 1
My first flight at Firle with a top landing.
7 Sep 2019

I was a little eager to launch and admit I rushed a little; I failed to level my wings and as I stepped forward to launch, a gust got under my left wing and lifted it. I was very fortunate and able to abort take-off; a moment later would have resulted in an inevitable uncontrolled turn into the hill probably followed by an inverted glider with me strung up upon it! 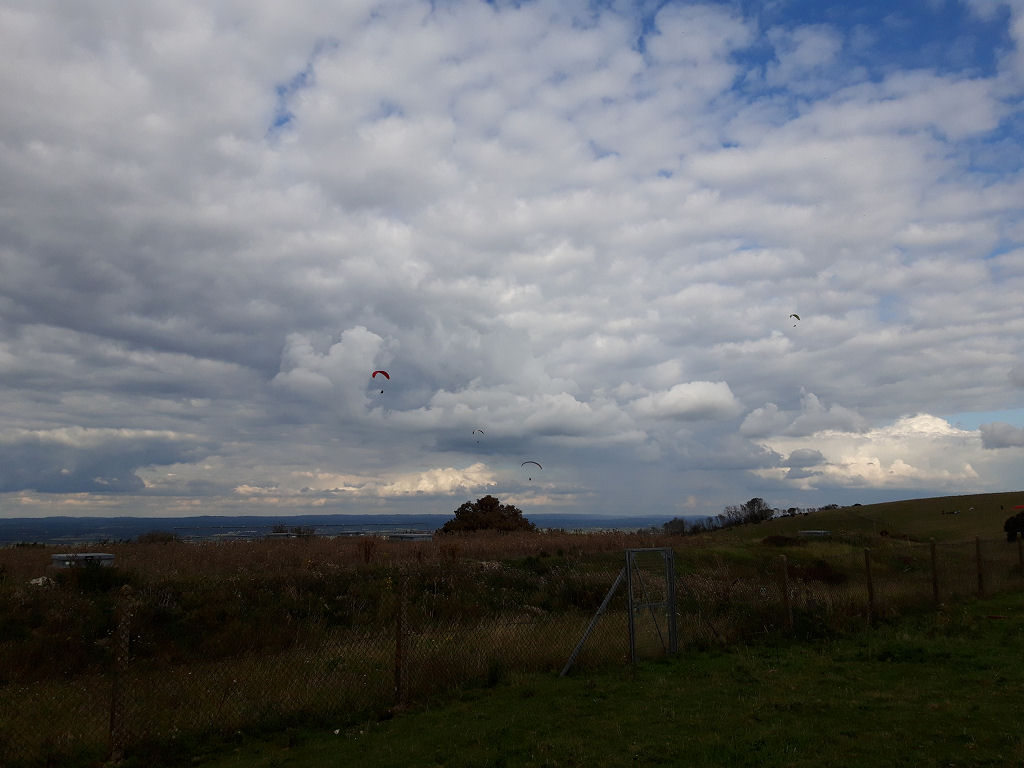 Paragliders
Another lift cycle begins and some paragliders, including one tandem, take to the air.

After I had recomposed myself, I quickly wiped that thought and allowed the glider to settle above me where it quite happily floated in the breeze. After a few steps forward I propelled the glider safely into the air. The paragliders had also began to launch but unlike my earlier flight, we all soared at the same level and had to share the limited lift; not my preferred situation!

Despite this being a longer flight, I never got high enough for a top landing. Be that a result of the paragliders, the modellers flying and me flying quite a bit away from the ridge, it resulted in my slow and inevitable descent to the bottom landing field. The air down there was pretty lifty and as a result, I stupidly aligned myself to land on a downslope. I had to run off the landing but was pleased it was uneventful.

Firle Flight 2
My second and final flight of the day at Firle concluding with a bottom landing.
7 Sep 2019 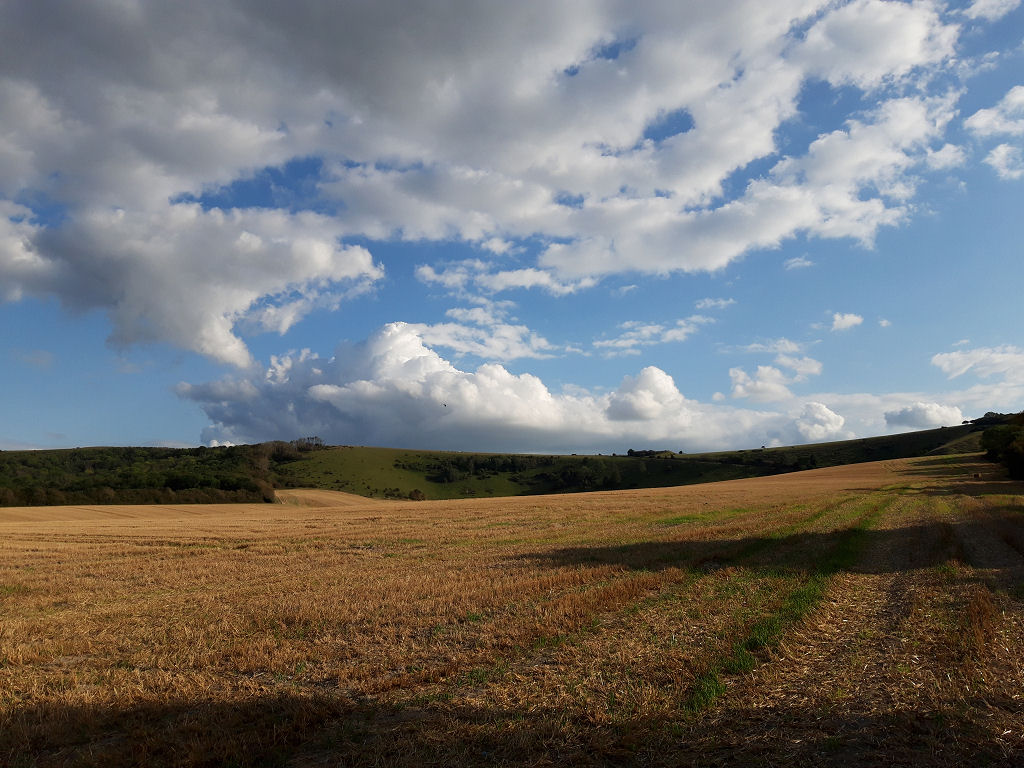 Bottom Landing
A view from the bottom landing field looking back up to Firle with Maceij flying under one of the clouds!

After I had carried my glider and parked it in the corner of the field, I returned to the top of the hill to fetch my van. As I drove down to collect and pack my glider away, I passed my former instructor John headed up the hill on an electric mountain bike he'd been working on. After he spotted me, he switched direction and appeared in the field to say a hello. After a catch up and look at his electric mountain bike conversion kit, he returned home to make some adjustments and I packed up and headed home!

Clearing the Cobwebs
Video highlights of my two flights at Firle in East Sussex.