I don’t know why, but every time I have an extended break from flying my confidence dwindles, and I find it ever increasingly difficult to motivate myself back into the air. Furthermore, the weather this year had been far from optimal for flying and when it has, I have had other commitments. Needless to say, I had not had the best start to 2019!

The forecast for the bank holiday weekend hinted of the possibility of flying at the Dyke or Firle. Saturday’s was forecasted to be too strong and Sunday’s suggested late morning or afternoon. The wind was forecasted to be a northly and back to a north westerly. Both Firle and the Dyke would probably work, but it being a bank holiday weekend, I wanted to avoid the crowds that would surely be at the Dyke, so by Saturday night, my decision was made, and I confirmed my intent on the local Telegram group.

On Sunday morning I checked the forecast again only to discover it had been revised with lower wind strength, expected to reduce through the day and back to a north westerly. I quickly scrabbled around and got my kit ready as it now looked like the best opportunity to fly would be in the morning with the skies expected to be full of paragliders by early afternoon. 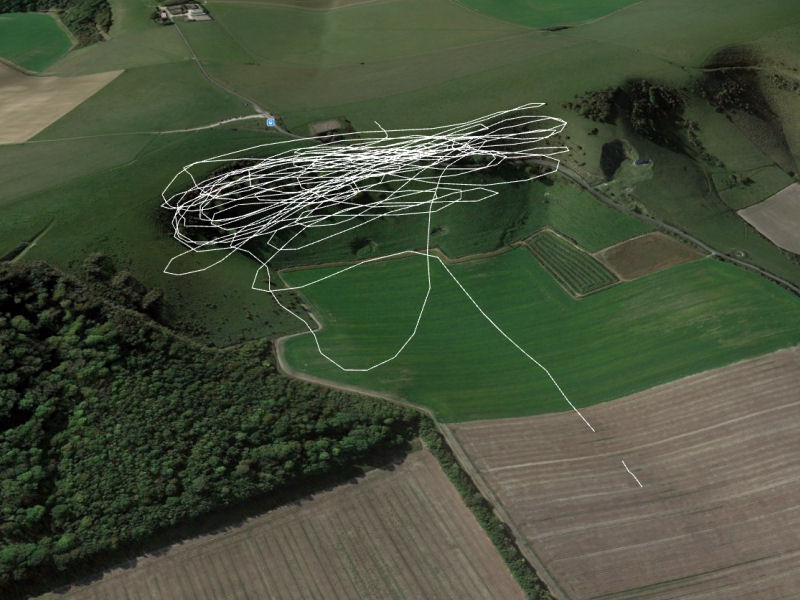 I arrived at Firle in pretty good time to find Nicos had almost rigged his Discus. I was keen to rig my glider and give it a thorough check-over after having its sail off and side-wires replaced, so set about doing this straight away as I knew the conditions were going to deteriorate throughout the day. Maciej arrived and a bit later Mike with his lovely new looking Gecko! After Nicos had completed a short but pleasant 30-minute flight, pushing out nearly to the A27, he returned to the hill and safely top landed as the sky began to over-develop.

By 11:00am I was now ready and with assistance from Mike on the nose, was assisted to launch. Maciej was just behind assisted by Nicos. To my left a couple of paragliders had begun to set-up and more had arrived which confirmed the forecast. After I re-positioned my glider a little closer to the front of the hill, I smoothly launched and turned to the right and began to soar. For the wind strength, the air did not really feel very buoyant, in fact, at times the air was rough as pockets of rising air, mixing with the surrounding air bubbled up through the ridge. This was probably exasperated by a well-established fire directly up-wind with its plumes of smoke bubbling through the limited ridge lift. I hoped nothing toxic was being burned as I inhaled it in my vain attempts of finding a good climb within it. Observations did however reveal one thing, the smoke wasn’t really going up, which confirmed my difficulty in climbing and maintaining!

When I had made 150ft above take-off, I was a little more comfortable and established. Prior to this, I had been beating back and forth along the ridge trying to climb and had inadvertently prevented Maciej from launch. From my new vantage point and clear of take-off, I watched Maciej's launch below. I believe he launched as a thermic gust blew through and as I looked down, I could see what looked like him hovering just above launch, followed by a couple of wobbles before he was able to clear the take-off and start to ridge soar. Within minutes he was well above me and doing a great job of staying up there!

Soon after, the first paraglider launched and with myself, Maciej and the paraglider all competing for lift on this small site, I began to work my way forwards over the bottom field to explore lift there. With some limited success I managed to climb and contemplated landing while I was high. As I looked at my approach, I spotted a large model glider flying in what would have been my landing zone, so opted to continue to fly until the pilot of said aircraft had traversed the landing area and landed (I assumed he was doing this to avoid carrying it back to his car).

A little frustrated, I continued to bounce around in the lumpy air out front and once again pushed over towards the fire. The smoke now appeared to be whistling along beneath me without rising and my vario hadn’t emitted one of its friendly, ‘We’re going up’ beeps for a while, so I turned around and dashed back to the ridge only to re-join it at ridge height. Perhaps I was being a little defeatist, but concluded I was now destined for the bottom landing. After I scratched two further beats in the main bowl and became lower with each one, it was obvious. 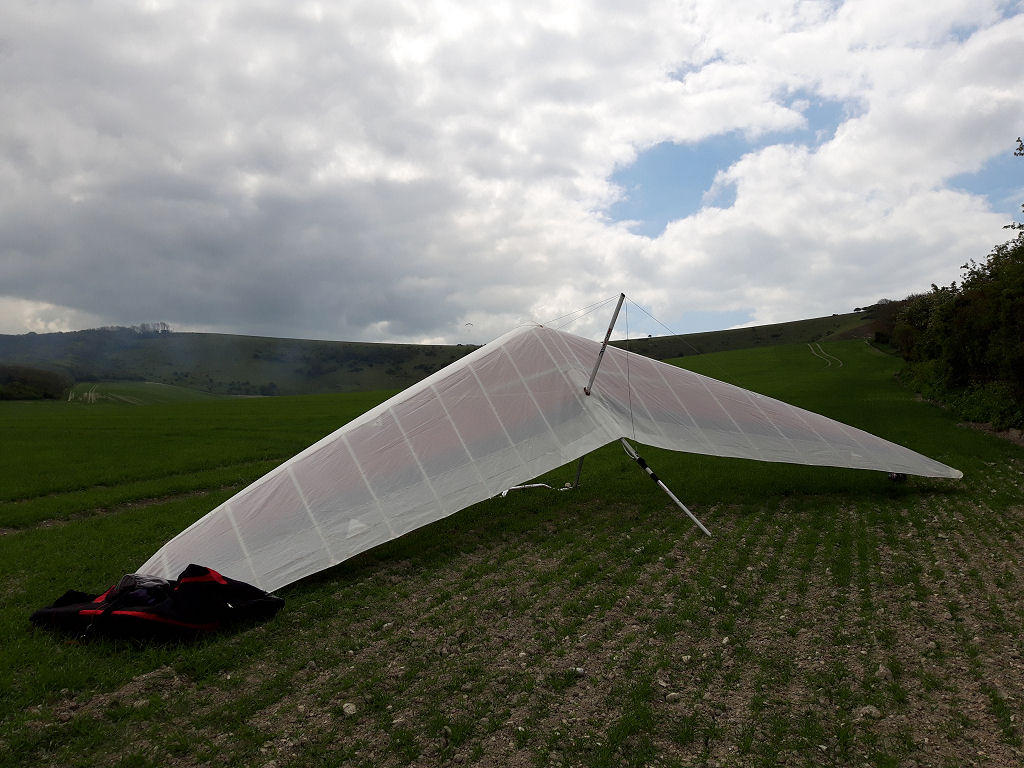 Bottom Landing
My U2 tucked in the corner of the field after a short flight at Firle.

I executed a few additional S-turns to bleed of some excess height and lined up to land in the shallow valley that projects directly out from the ridge. Still with some safe height, I transferred to the uprights and managed to pop the nose when I reached for the left up-right! The exact same thing I did in Lanzarote! (note to self – I need to PRACTICE not doing this!). With height giving me a margin of safety, I recovered as I pulled the uprights in, lined up and landed with a half-flare to arrest my forward momentum.

On reflection, this was not a great flight; the air was rough, and the flying was hard-work with minimal reward, but it had broken my flying downtime and motivated me to once again return to the air. After I had carried my glider along the tramlines and safely parked it at the corner of the field, I looked back to see Maciej had also been sucked into the bottom landing (he landed a little further up than I) and the paraglider had top landed. I guess that was a sink cycle!

I was now positioned the opposite side of field to the bonfire which continued to burn. From this perspective, I had a unique view of the smoke and could clearly see its reluctance to rise as it clung to the ground on its journey to the ridge. What clearer indication of the lack of buoyancy in the air! 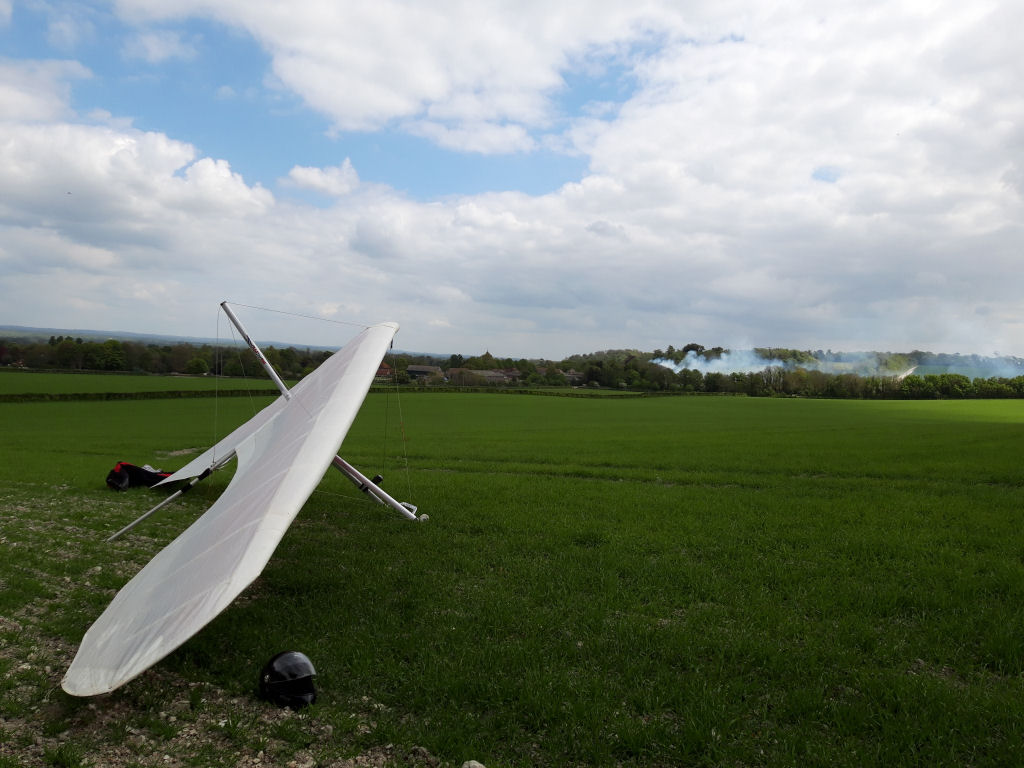 Bottom Landing
My U2 in the bottom landing field and the smoke source that I had been watching throughout my flight.

After Nicos had collected me (thanks Nicos and Paul), I returned with my van to collect my glider then headed back-up the road to collect Maciej. Somehow, he had already collected his car so didn’t need a lift back to the top which was where I was headed as with flying now concluded, my mountain bike packed as a B-plan was beckoning! I was off to explore a new section of the South Downs Way – a trip to our former flying site Swanborough was on! 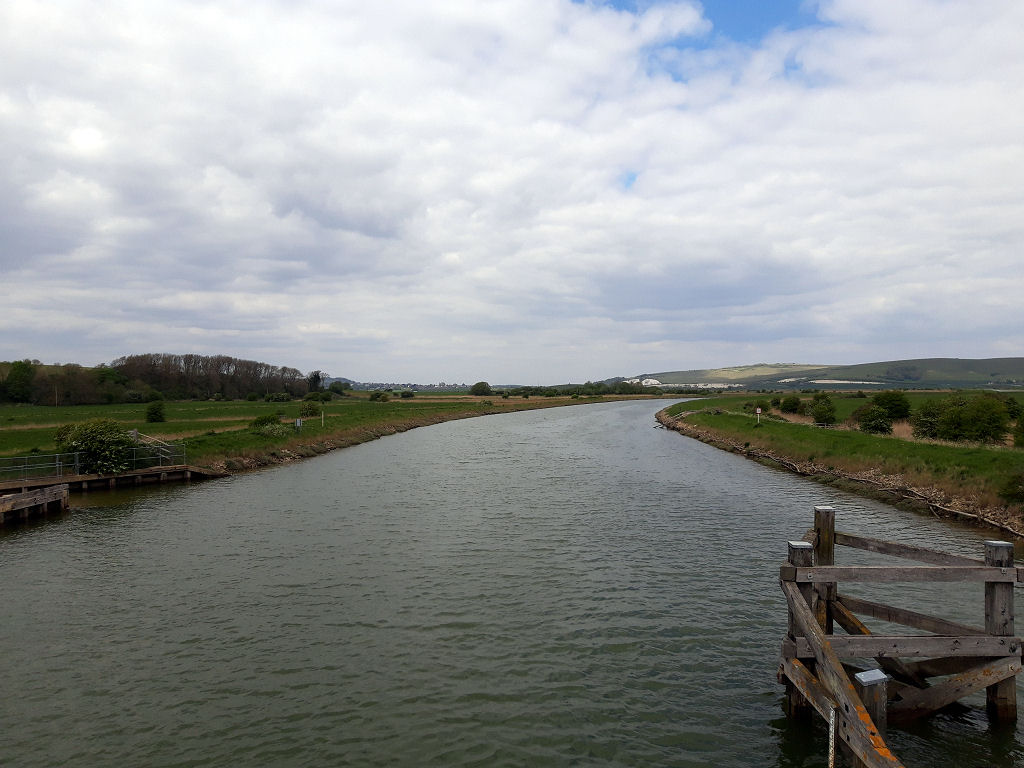 Crossing the River Ouse
After my morning hang gliding flight at Firle, I hop on my mountain bike and explore a section of the South Downs Way that I've not ridden before and head west from Firle and cross the river Ouse. 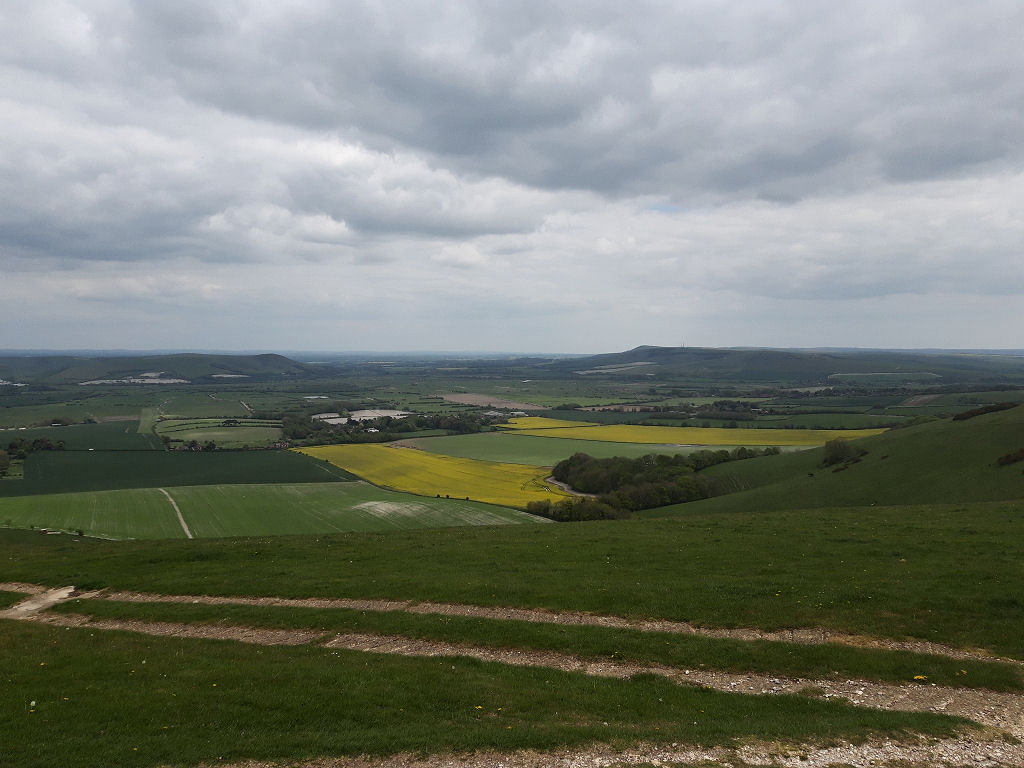 View From Swanborough
After my morning hang gliding flight at Firle, I hop on my mountain bike and head across to Swanborough and reminisce about flying from this lovely easterly site. Mount Caburn is in view to the left and the Firle ridge on the right.