Flight 1: U2 160; Mount Caburn; 0h 27m; 200ft; 10-15 mph; SSW, Overcast with weak thermals. Sun broke through towards end of flight. I wasn't really in the mood for flying today, but when my glider was dragged half way up Mount Caburn by a fellow pilot I felt compelled to fly it. Not a great flight, but great to be back in the air after my previous accident.


Some Much Needed Motivation

It's funny how my mind reacts to a break in flying; half of me really desired to return to the air and the other half was more rational and considered the associated risks. This should come as no surprise with a young family, my last flight resulting in a crash with injury and a work colleague seriously breaking an arm during training. My head really wasn't in the right place and after meeting Nicos at Newhaven cliffs I dismissed flying there and headed over to Mount Caburn where Airsports Sussex were doing tandem flights 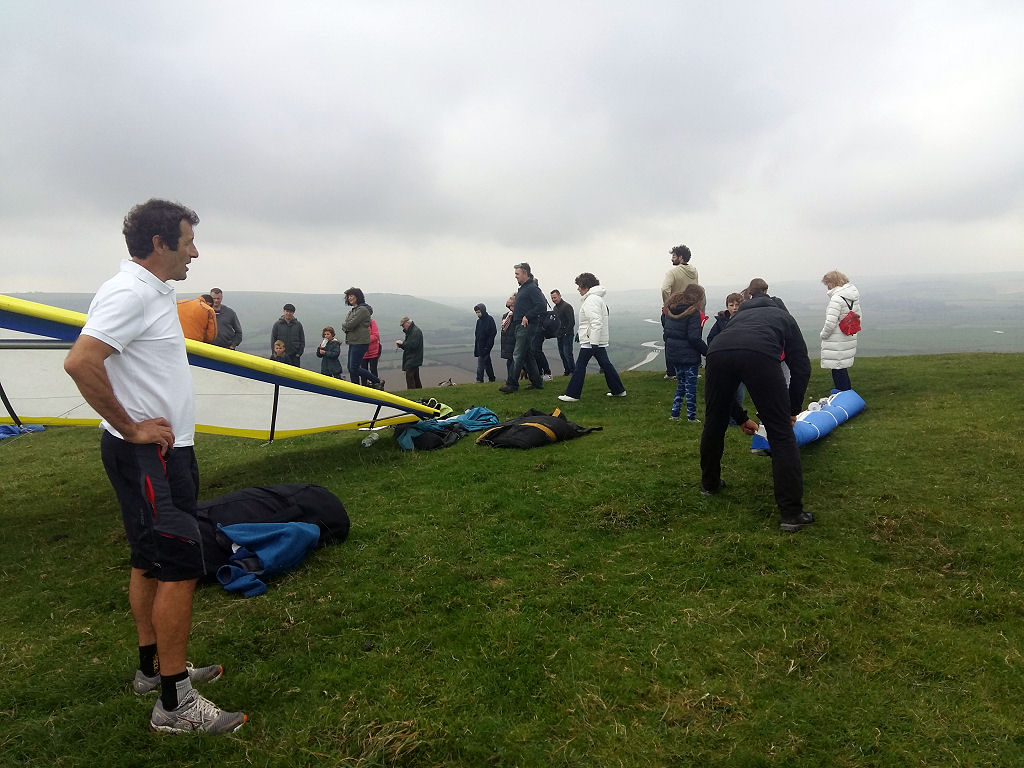 Caburn Summit
After dragging my glider with assistance to the top of Mount Caburn, I find Airsport's Sussex's passengers and friends waiting for their tandem experience flights!
15 Oct 2017

When we arrived Maciej had already dragged his glider to the summit and had returned to collect his remaining equipment. I seriously procrastinated if I would fly or not and had pretty much made up my mind that I wouldn't. Unfortunately, I had already removed my glider from the van and attached it to the trolley (I suspect this was a result of encouragement from Nicos and Maciej). Confronted with the physical effort of climbing Caburn with my glider and not feeling particularly special, my decision was made - I wouldn't fly. As I began to collect my gear and put it back in the van I noticed my glider had vanished! I asked Nicos where it had gone and he smirked and informed me that Maciej had set off up the hill with it! I cannot tell you how guilty I felt and quickly gathered the rest of my equipment and set off after Maciej. He had already ascended a significant distance up the hill when I caught up with him. The decision of whether I would fly or not had been made! I suspect both Nicos and Maciej had something to do with this and I'm very grateful for them to give me that encouragement and motivation that I needed on this particular day!

At the summit Matt and Luke had begun taking passengers up into the air and Maciej and myself started to rig our gliders. Nicos wasn't flying and helped with Airsports Sussex and when I was ready, assisted me to launch. Both Luke and Matt were flying and when I was positioned on launch and with sufficient space, I took off and joined them. It was almost a year ago that I last flew Caburn and on that occasion the air on launch was rough, in contrast, for today's flight, the air was incredibly smooth. 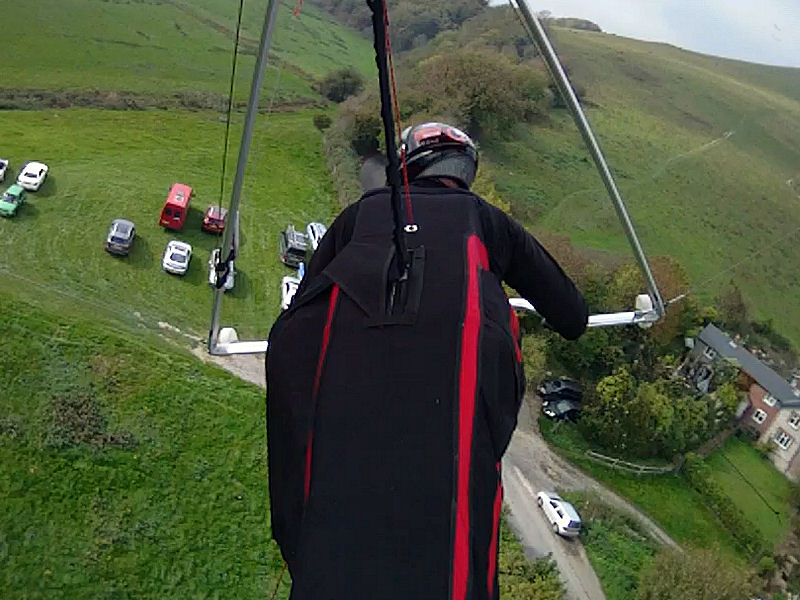 Landing Approach
My landing approach at Mount Caburn's bottom landing field - being a little high I perform a number of s-turns to bleed off height ready for landing.
15 Oct 2017

Once airborne I settled down and flew mostly to the west of launch steering well clear of the tandems. I was surprised by the lack of buoyancy in the air and struggled to make any significant climbs. There were thermals around but they were difficult to exploit so I was contempt with boating back and forth with the tandems. At one point I found myself a considerable way below the top, a result of me unintentionally flying too far away from the hill. I contemplated heading off to the landing field but when I looked across to it, I realised that it was surprisingly a long way off. There are also a line of high trees between me and it that would have impeded a glide to the landing field. This focussed me to stay up and I scratched my way back by flying close to the hill where I connected with some nice lift, especially on the south west facing flank of the spur.

As Maciej launched the lift seemed to dissipate and myself, Maciej, Luke and Matt were forced into a smaller area of lift. When conditions get like this you appreciate some of the larger sites, unfortunately, Caburn is not one of these so I set off to explore the air out front with a view of heading off for a bottom landing. Like my flight there last year, I once again found lift over the landing field and was able to push quite a way forward without losing height.

Eventually it was time to land and after losing height with some very inefficient S-turns, swooping over the car-park, a slight glide past the landing target and an aggressive flare, I landed with a no stepper! It was only a 27 minute flight, nothing special, but it got me back into the air again and recalibrated my mind! Days like this really highlight the importance of the flying community and without Nicos and Maciej's encouragement, I'm pretty sure I would have headed home without flying. I would personally like to thank them both for today; they were spot on and gave me that needed support and motivation - so if you're reading; thank you! As for Maciej, well - the man is a machine! He carried 2 gliders up Caburn and was still flying as I returned home along the A27!

Awesome
Awesome read Dan. I really enjoy flying with you and your company. Great write up as always
By Luke on Sun, 15 Oct 2017 07:10