Flight 1: U2 160; Firle; 1h 03m; 1013ft; N-NNE 15-20mph gusting; overcast with some thermal activity. Top landed and almost got caught out by the wind strength on landing with the glider travelling backwards across the ground towards the barbed wire fence.


A Windy Day at Firle

For me, 2017 hasn't been a particularly great year for flying. Those northerly winds that our local sites on the South Downs take have been illusive at best and the rare occasions when they have blown, I've been unable to make it. At the start of the week, Friday and possibly Saturday had promised to deliver and it was fortuitous that I had booked Thursday and Friday off work. What could go wrong? By Monday, Nicos had posted on Telegram about Friday flying and my reply said that he'd jinxed it! Sadly, by the time Friday arrived I was proved right. The wind had dropped significantly to the original forecast and had backed to a westerly. I considered going to the Dyke but when I looked at the weekend forecast, Sunday looked to be a far better day so I elected to build some brownie points at home.

On Sunday morning I had set-off early with a 10am arrival time at Firle in mind. Neil passed me on the A27 between Brighton and Lewes and his glider bag caught my attention. It flapped around his glider like an oversized sock and was possibly the wrong size for his glider. When we arrived this was a talking point and we suspected the wrong bag had been supplied with his Wills Wing U2.

At Firle the wind was a strong 15-20mph and occasionally gusted with considerable strength, despite this and armed with the knowledge that the wind would veer to a north easterly later and drop in strength, everyone unloaded their cars and began to rig their gliders. It's normal to rig gliders in the lee of the reservoir. This can sometimes give a false impression of the actual wind strength so as the morning progressed, we can be forgiven for thinking conditions had improved. A quick walk to the front of the hill quickly corrected any false aspirations of launching! 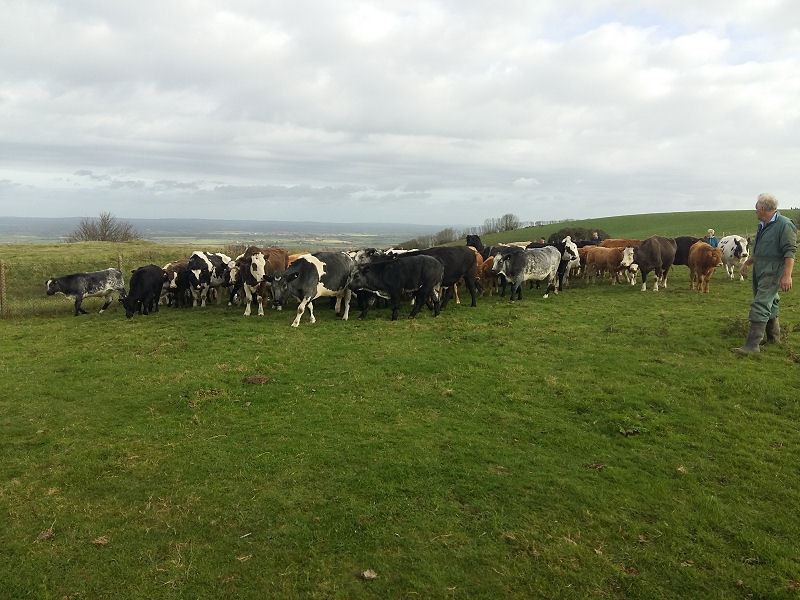 Mooove Out of the Way
We had to 'Mooove' our gliders out of the way to allow the farmer to herd his cows down off the hill.
29 Oct 2017

By mid-morning, with most of us rigged, the local farmer arrived with a herd of cows. Unfortunately, all of our gliders were directly in the path that he wished to herd his cattle. What followed was a mad dash to move our gliders and kit. Paul L. had already launched and Nicos, with the pressure of all the cattle headed in his direction, wisely took to the air. By the time the cattle had vanished down the front of the hill, I was ready so made my way, with assistance, to the launch area.

It was still towards top end and I struggled to hold the glider on the ground so nose assist was greatly appreciated (thanks Pete). When the glider settled, I called 'Release', waited for the nose man to clear, then set-off with a hard run and pulled the bar in to build good airspeed before leaving the ground. I was quickly airborne and thankful of the extra airspeed as I hit a lump of not so pleasant air as I turned to the right and began soaring the Firle slopes.

For the wind strength I was surprised by how little height I had made after my initial beats back and forth along the ridge. I eventually made my way up to a more comfortable 200ft above take-off by exploiting the spur to the west of take-off. This hinted that there was now a little more east in the wind. By this time, Paul and Nicos had set-off towards Firle Beacon with John, Neil and I flying in the main bowl. Modellers were flying their bowl west of launch, so I decided to explore the ridge to the east. With the wind now more of a north of north east, I progressed slowly and as I crossed the plantation, I procrastinated if I should turn back; instead, I cranked the VG fully on and pressed on towards Firle Beacon.

There was occasional spring like thermals that ripped through the sky, some of which tipped my glider. One in particular lifted the rear of my glider sending me downward in a dive! I felt the reflex of the glider haul me back into level flight after an initial period weightlessness. I have to admit it wasn't the most pleasant of flying and at times it was physically demanding. Several times I braved the north easterly facing section of the ridge and headed off towards Bo Peep. I crossed two bowls of this section before I turned back towards Firle Beacon where I struggled back against the headwind. 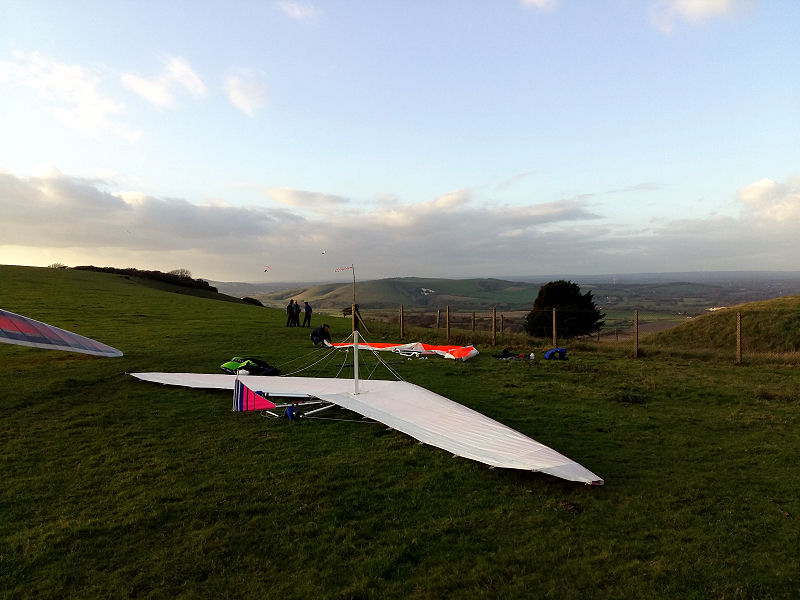 Views Towards Caburn
Beautiful views across to Mount Caburn from Firle.
29 Oct 2017

My favourite part of the flight, which was also my highest, happened when I found what can best be described as a lift line that projected outwards from Firle Beacon in the direction of Middle Farm. I simply flew directly outwards where I gently climbed and penetrated against the headwind with relative ease. The lift was on a knife edge, too much to the left or right and I'd be tipped out of it and somewhere in between was the sweet spot. I must have been a kilometre out front at 1,000ft above take-off when I began to contemplate landing in a field near Middle Farm (their cakes and coffee are good!), but instead I flew a direct line back to the Firle take-off.

Back above take-off, I was still a significant height above those soaring below and noticed that some had now top landed. At this height I felt more comfortable doing 360's in the thermals that passed and chained 4 orbits together before having to fly upwind after being blown over the back. Eventually I had found myself back at ridge height and decided to top land. I made my approach from the east flying over the car park but maintained a short distance in front of the barbed wire fence that now divides the former landing field. I tracked westward and was convinced that I was going to overshoot. In preparation for landing, I climbed the uprights and noticed I that I had started to travel backwards across the ground. I pulled in hard and looked down towards my feet and the ground looming up behind me; still flying backwards I saw the barbed wire fence come into view! Shit! With feet to spare I met the ground and my backward progression towards the fence stopped! I had been caught out by the accelerated airflow which appeared to be more prominent at ground level; perhaps a phenomenon of the air being funnelled around the side of the reservoir? Landed, I struggled to get my glider under control. I glanced towards those pilots already landed and spotted Paul headed in my direction. I was able to get my foot on the base-bar and a grip on the nose wires when Paul and Nicos arrived. Much to my appreciation, they assisted me back to the lee of the reservoir where I collapsed my glider. 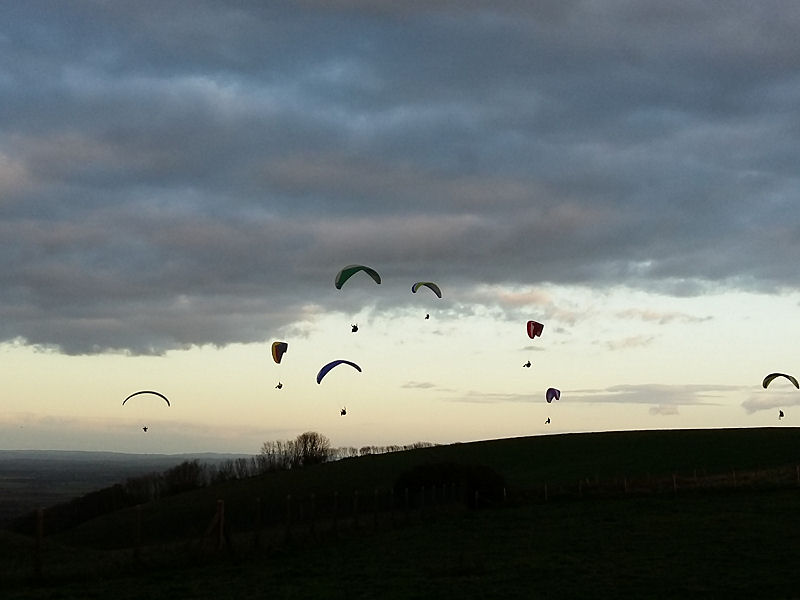 Paragliding Hour!
As the wind drops the paragliders take to the air marking the end of flying for me for the day!
29 Oct 2017

The wind had certainly increased in strength and for a short period after, those pilots already airborne opted to top land and all shared similar experiences to my own; one was ground looped and two others landed behind the fence. This was not Firle at its best!

I waited a couple of hours for the wind to drop and by 3pm it appeared to be much better. I watched Stuart launch, a recently qualified CP pilot, and spoke to his parents that had come to see him fly. Just when I considered one final flight, the wind literally switched off and the paragliders, that had foreseen a short opportunity for a flight took to the air and signalled the end of the day for me. 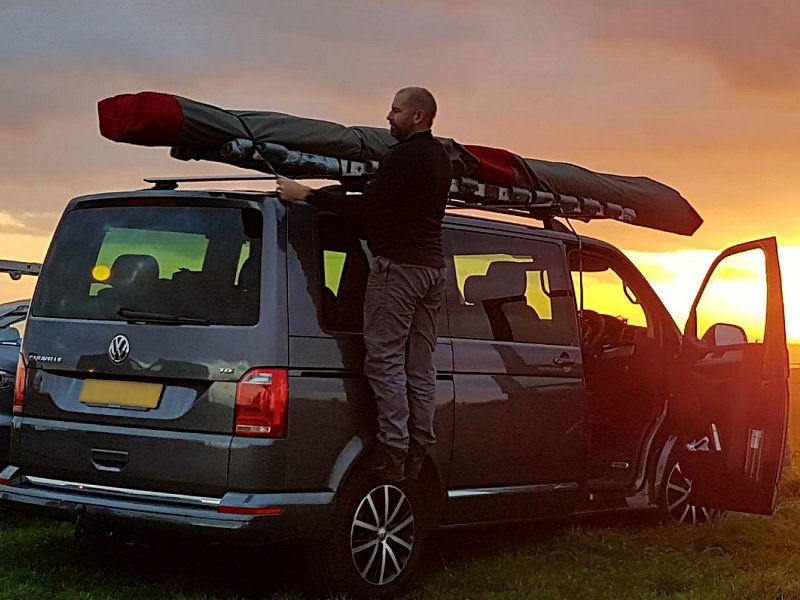 Packing Away
Nicos captures this beautiful photograph of me packing my glider away and securing to my roof rack ready for the drive home as the sun sets in the background!
29 Oct 2017