Flight 1: U2 160; Devil's Dyke; 0h 40m; 600ft; Waited most of the afternoon for the weather to come through. Launched after rain and slowly made it to Truleigh and back. Wind was moderate and at times felt like it had a bit of east in it. Top landed on the wheels when I got dumped in the large field at the back.

Throughout the week I was eagerly watching the northerly winds forecast for the weekend and made preparations to relinquish myself from my weekend duties to permit me to fly. By Friday night it was obvious to me that the front travelling down from the north would bring rain with it, so I aimed to arrive at the Devil's Dyke early afternoon, and hoped the weather would clear enough for some ridge soaring.

Sure enough, Saturday morning was pretty wet with some sporadic heavy showers being reported across the region (hail in Lewes) so I concentrated on family duties in the morning and arrived at the Devil's Dyke around 1pm. It was very overcast and the sky out front showed plenty signs of drizzle. Armed with this knowledge, my glider remained on the roof of the car until 3.30pm when I noticed the sky clearing to the north.

John Barratt was out with the school which confirmed my own opinion that it would come on good late afternoon and by 4pm, I was rigged and ready. I assisted Maciej off then launched myself. To my surprise the wind had veered to the north so I headed across the main bowl leaving Maciej and those others behind and set off towards the pylons. Spring like thermals popped off and I 360'd in a few to top up my height as I climbed then sank back to ridge height as I progressed westward. I decided to cross the pylons and try the Truleigh run.

I made it to Truleigh, albeit almost entirely at ridge height before, I found my first reliable climb which took me to 600ft above take-off. As I looked back towards the Dyke, I noted that no-one else had followed me and those soaring the Dyke looked to be scratching. With my height topped up at Truleigh I set off on my return journey back to the Dyke. Progress was exceptionally slow and I concluded that the wind had veered to a north of north east. When I made it back to the Dyke I could see some hang gliders had bottom landed leaving myself and Maciej scratching together in the Dyke bowl. Maciej is a low air-time pilot with his red ribbon displayed, so I gave him plenty of room, which at times meant I relinquished the best parts of lift to him.

After 10 minutes it was evident that the conditions had got weaker and paragliders had begun to launch. I decided as soon as I was high enough that I'd top land in the large field (others had already landed there). On my first attempt I was destined to land just behind the earthworks, so aborted that landing attempt to avoid being rotor'd in! On my second attempt, after a little struggle to get high enough, I had a much better approach which put me at the back of the field; just in front of the barbed wire fence, however in the last few feet before touch down, I sank very quickly in dead air and didn't quite get my feet under me. What followed was a gentle landing on the wheels and a slide through the mud! No hiding this poor landing! 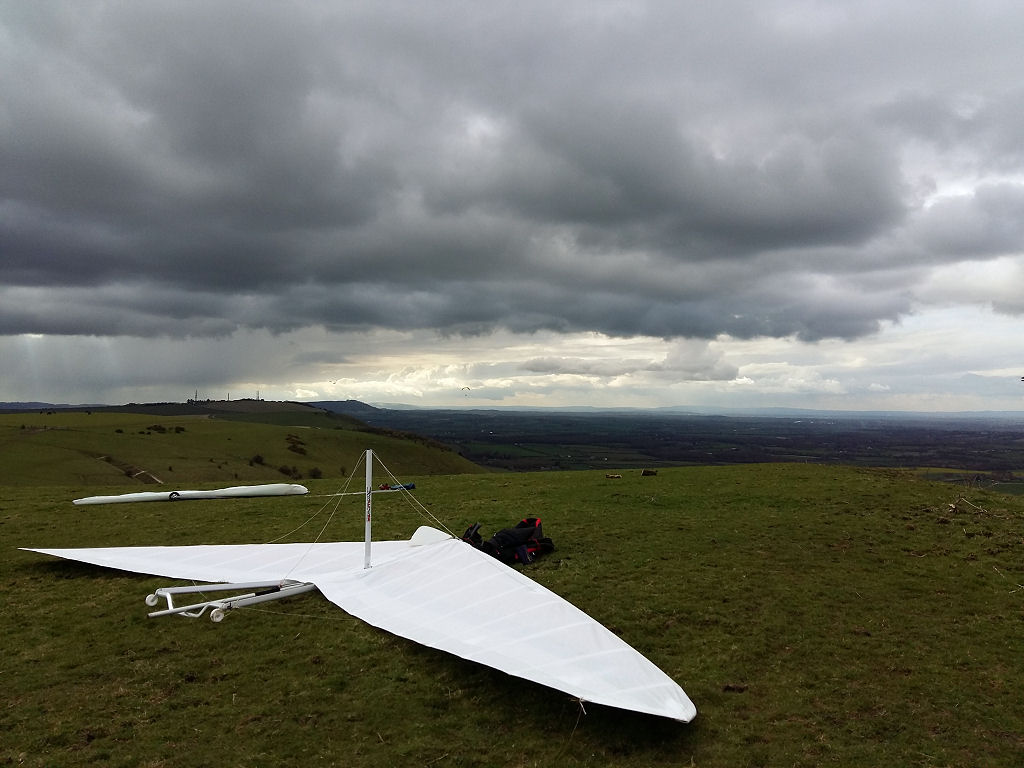 Flying Concluded
After a trip down to Truleigh and back and a struggle to get high enough for landing, I land in the top field at the Devil's Dyke and conclude my flying for the day.
16 Apr 2016