Flight 1: U2 160; Devil's Dyke; 1h 11m; 200ft; Early start was required. Wind dropped off throughout morning. After 3 attempts I scratched all the way down to Truleigh Hill; soared with a bird of prey, then returned to a very busy Devil's Dyke. Couldn't get high enough to top land so elected to bottom land as the sky was getting busy with traffic - hang gliders and paragliders.


The Early Bird Gets the Worm

No worms were hurt, but an early start was required as the forecast had predicted moderate winds early decreasing through the day. The forecast was similar to that on the 18 Sep 2016 and due to traffic, I had only managed a sled ride on that occasion!

I arrived at the Dyke around 8:45am and wasn't the first there. The wind was perfect for soaring and the clouds, although low, were above the hill. The true early birds were able to fly free of traffic and were able to practice top landings but by the time I was ready (09:50), a few paragliders had launched and the wind was notably lighter.

As soon as the paragliders had cleared the airspace ahead of me, I launched. The wind was quite a way around to the north so I made my way towards the main bowl and gently eased around the spur toward the northerly ridge. There was plenty of traffic to contend with and I appeared to be the lowest hangy in the air! After a few beats I was more comfortable but still scratching. There was one red ribbon hang glider flying, so I flew out from the ridge to give him plenty of room. The downside to this meant I wasn't really getting any good climbs so I decided to seek clearer airspace on the Truleigh ridge.

I was surprised that no-one else had attempted the Truleigh Run, but as I set out on the Truleigh Ridge and started hitting sink with minimal lift to reward me, I realised that the Truleigh Run was going to be hard work. I'd made it to the Pylons, but turned back for fear of sinking out. 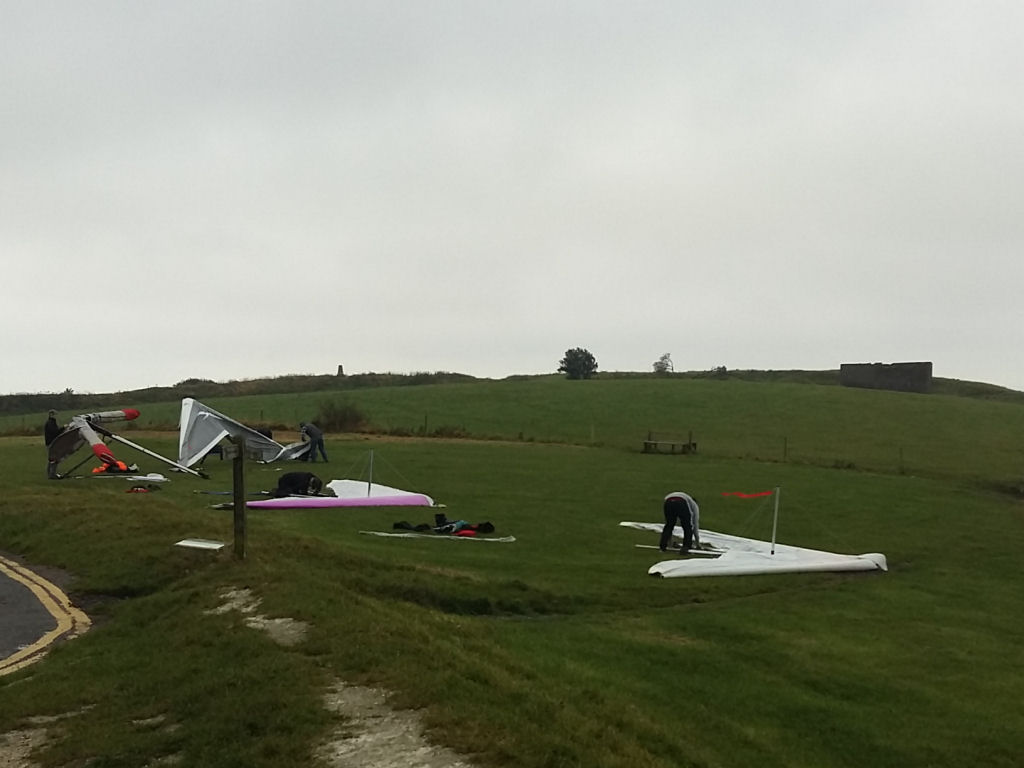 Early Start
An early start at the Devil's Dyke was required to make the most of the early morning soaring conditions.
2 Oct 2016

I attempted this a number of times, each time I returned to the main ridge in front of the pub; the density of traffic flying there appeared to increase - more hang gliders and paragliders! The Truleigh Run appealed to me more and more! Eventually I noticed Nicos and another hang glider headed down the Truleigh Ridge. I decided to follow and soon caught up and overtook Nicos. Nicos had wisely decided to gain height in a small thermal and I had elected to blast my way down the ridge. The whole time I looked at fields to the north just in case I was destined to bomb out somewhere.

Somehow, without getting above the ridge, I had scraped my way down to Truleigh Hill and was rewarded with my first climb; nothing special, a 100ft or so, but it was enough to finally get me above the ridge. Nicos briefly made it to Truleigh then as quickly as he had arrived he set off back towards the Dyke. Another pilot flying 100 feet above me chased after Nicos after which, I was left to enjoy Truleigh Hill by myself. 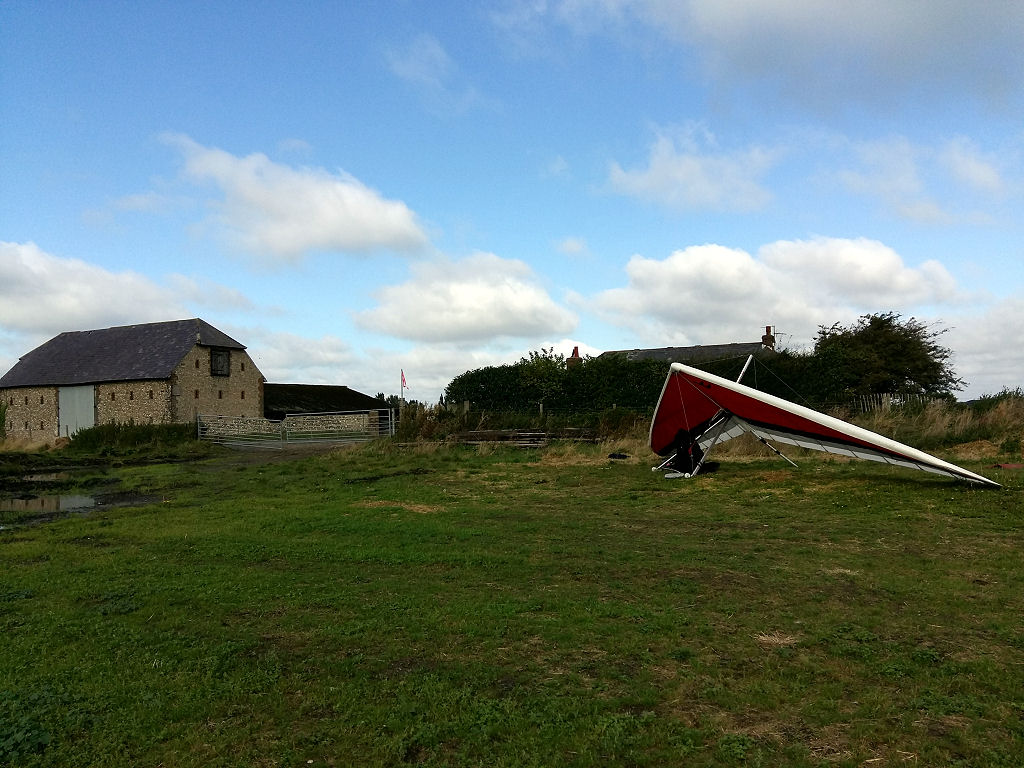 Bottom Landing
After a lovely 1 hr flight, Dan lands at the bottom landing to avoid the heavy traffic building in the skies above.
2 Oct 2016

I must have stayed down there for a good 15-20 minutes trying to eke out a good climb but I failed to connect with anything reliable. I briefly flew with a bird of prey (greyish blue head as viewed from above - Peregrine Falcon?), but was unable to identify what type of bird it was. With a quick flap of its wings, it took off and quickly climbed above me out of sight.

Once again I had found myself back at ridge height and I concluded that the wind had dropped in strength as predicted. I looked back along the ridge toward the Dyke and could see a vast smarm of paragliders had taken to the skies. In the back of my mind I had already made the decision to bottom land and as I returned back to the Dyke, I found myself in the thick of this traffic trying to gain height to top land. I wasn't the only hang glider that struggled and after 5-10 minutes of what I consider as being stressful and non-enjoyable flying, I decided on the safety of a bottom landing.

Now you would think getting down would be easy! I flew out towards the village of Fulking and lost very little height in doing so. I then returned to the Dyke bowl by flying across the bottom landing field and found myself 50 feet below the ridge. I then beat back and forth above the treeline just below launch and climbed at the modellers bowl and sank back in the main bowl. I had beat back and forth a good 10-15 times and lost next to no height. I looked up at those soaring just above me and realised that there was a good chance that I was going to climb back up into the most dense part of the traffic.

Eventually I made my way out to the middle of the landing field and completed a series of s-turns which finally set me up for a bottom landing. As I setup my final approach I hit lift and found myself in fear of completely overshooting the bottom landing. I reverted to my old school habit of stuffing the bar in; tried and tested on my previous lower performance gliders, but on the U2 the glider surged forward. Eventually I was able to get my tippy toes on the ground and drag them loosely on the soil until the flare point had arrived. I aggressively flared and the glider responded by abruptly stopping and I dropped to my feet. Perfect. 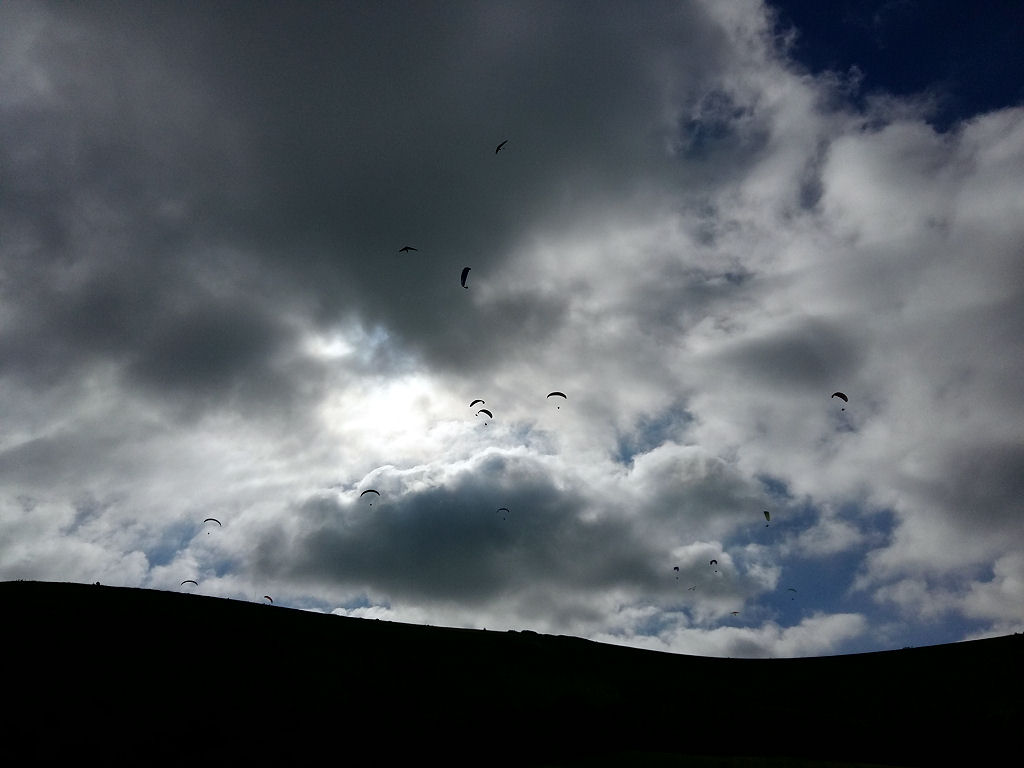 Traffic Above
The traffic flying at the Devil's Dyke as seen from the bottom landing field.
2 Oct 2016

I wasn't alone for long in the bottom landing field. One after another, the hang gliders above (and some paragliders) had come to the same conclusion as I, and all headed for the safety of a bottom landing - there were some good landings and some not so good; all in all, no bent aluminium or broken bones; a successful day! 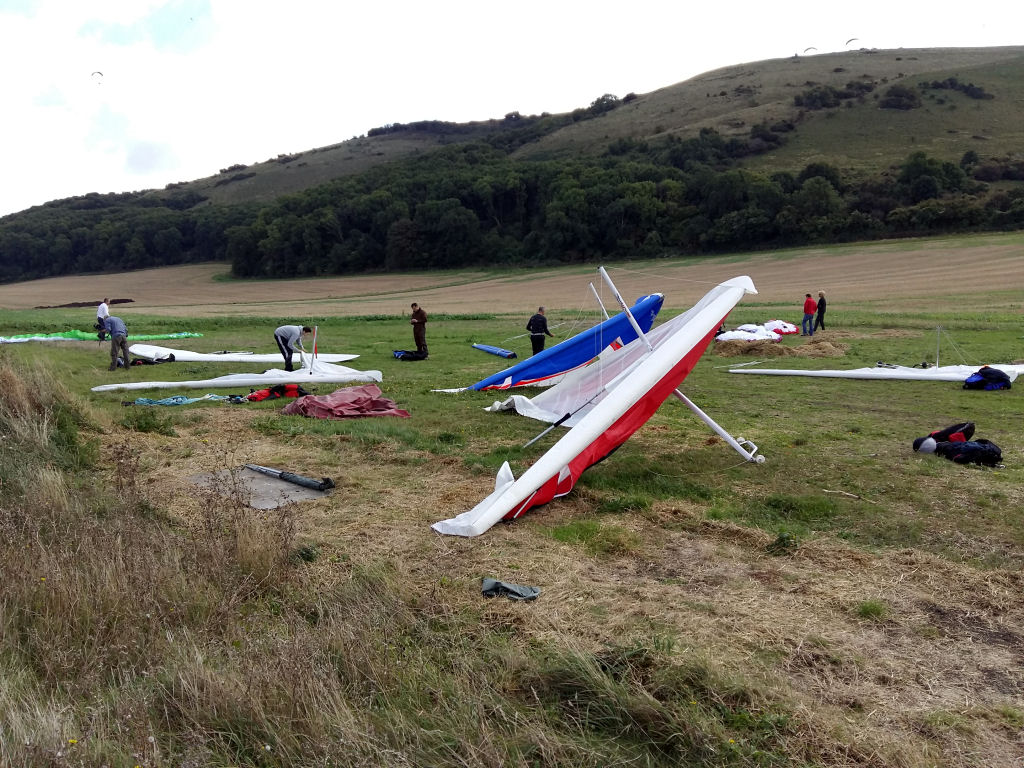 Great post, Dan. I tried going for the Truleigh run a couple of times but kept hitting sink by the power lines and bottled it. I think you must have been the hangie I saw a couple of times on that ridge, then! I'll be one of those not-so good landings you mention! :D
By Mark M on Mon, 3 Oct 2016 12:10
Thanks Mark - your landing wasn't that bad! Shows the importance of wheels - I'd never fly without them! The bottom landing was tricky that day and considering you hadn't been out for a while, you did VERY, VERY well!
By Dan Hamblin (webmaster) on Mon, 3 Oct 2016 12:10